(Inglewood, CA) — Three Weavers Brewing Co. will release the 2016 edition of Unity with an official launch party at their Inglewood brewery on Friday, May 27 at 5p.m. The annual collaboration brew created in honor of L.A. Beer Week was brewed with the help of members of the Los Angeles County Brewers Guild and will be available on draught and in 22-ounce bottles. 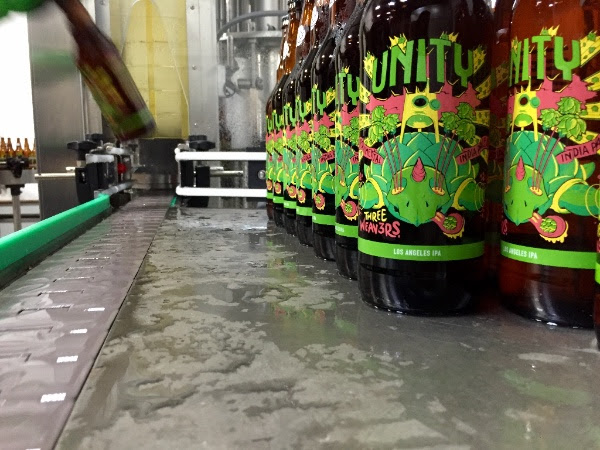 This year’s Unity brew was conceptualized by Three Weavers Brewmaster Alexandra Nowell who is calling the beer an “experimental IPA” due to a generous dose of YCH Hops’ experimental hop varietal HBC522. Nowell had the good fortune of being given access to this new hop — so new, it not only doesn’t have a name, but an official commercial release has not been announced. Hop-lovers will be pleased to drink this 7.4% brew with bright notes of lemon zest, stone fruit, and a satisfyingly resinous finish.

“I was impressed by the character of the raw hop,” says Nowell. “It has a bright orange character and a subtle pine resin scent. It’s got that quintessential hoppy aroma.”

Three Weavers enlisted the talent of soon-to-be L.A.-based (but notably San Francisco-based) Nick Fullmer to create this year’s Unity label art to bring a unique touch of character to the beer’s bold, screen-printed bottle design. Fullmer has built a reputation in the craft beer community for helping built branding for many popular breweries including Alameda’s Faction Brewing and Sacramento’s Bike Dog Brewing. Nowell explains that when it came to the bottle concept, Fullmer had full reign.

“As brewers, we express our art through beer — and rarely with any hindrance from others. Why not allow our label artists to do the same?” says Nowell.

Guests are invited to join Nowell and Fullmer for Unity’s official release party on May 27th from 5p.m. to Midnight. A full lineup of Three Weavers beer will be on tap and a special art exhibition of Fullmer’s work will be on display through July 2016.