(Inglewood, CA) –  Three Weavers Brewing Company has announced an aesthetic refresh to their lineup of Inglewood-brewed beers including updates to their cans, secondary packaging and logo. Redesigned packaging is now starting to appear across their California-wide distribution footprint. The brand update aligns with the brewery’s five year anniversary, to be celebrated with a tiki-themed bash starting at noon on Saturday, November 16, at Three Weavers’ Inglewood taproom. Partygoers can expect a full day of live bands culminating in an 80’s dance party, food trucks and the release of Little Mahalo IPA, a specialty beer made in collaboration with Device Brewing Company. 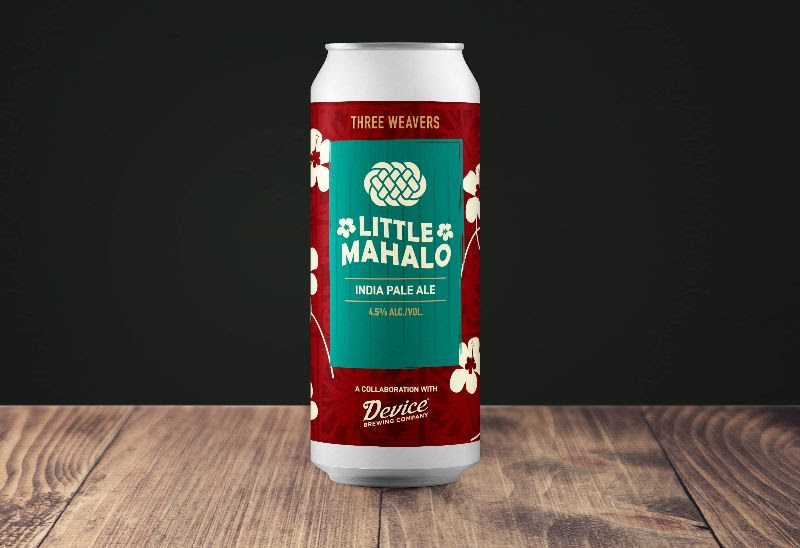 Three Weavers’ Brewmaster, Alexandra Nowell, commented on the design update: “We’ve always been proud of the strength of the Three Weavers brand, but as we enter our sixth year, we thought it was appropriate to give our presence an update. Three Weavers has matured over the years and we feel this refresh reflects that sentiment perfectly and elegantly.”

Three Weavers was founded by Lynne Weaver in 2013 and the original logo was inspired by her Japanese-American heritage. The knot design that appears across the brand ties together an image from traditional Japanese gift-wrapping with Weaver’s American last name. The new look retains the original clean lines and modern color palette, updated with a premium design that reflects the brewery’s growth and evolution over the years. The imagery is organic, minimal and sophisticated, and consistent across the brewery’s lineup of exceptional craft beers.

Approaching their sixth year of operations, Three Weavers Brewing Company remains dedicated to their mission of building a positive sense of community through the collective passion for craft beer. Fittingly, beer lovers will be brought together during the five year anniversary celebration to enjoy tropical beer slushies, barrel-aged rarities and limited release Little Mahalo IPA, a 4.5% brew that’s bright, crushable and boasts a massively hoppy finish thanks to a blend of superior Southern Hemisphere hops – Galaxy, Nelson Sauvin, Motueka and Waimea. To see more details about the five year anniversary celebration, including the music lineup, click here.

Look for updated packaging today at California’s purveyors of fine craft beer, and be sure to join Three Weavers on November 16 at their five year anniversary celebration. There is no charge for admission. Tiki attire is encouraged. Email Chelsea Manchester with questions at [email protected]

About Three Weavers
Three Weavers Brewing Company is an independent craft brewery with a mission to build a positive sense of community through the collective passion for craft beer. Founded by Lynne Weaver in 2013, Three Weavers is one of the largest independent craft breweries in Los Angeles County and currently expanding production and distribution on the West Coast. Led by award-winning Brewmaster, Alexandra Nowell, Three Weavers craft beers have received critical International acclaim, winning a World Beer Cup Gold Medal in 2016, a GABF Silver Medal in 2017, a European Beer Star Bronze in 2017, and the Australian International Beer Awards Best IPA and Champion International Beer in 2018. Three Weavers is proudly brewed in Inglewood, California.