This May Not Be The Last San Diego Real Ale Festival 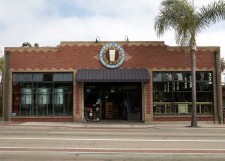 Ever since Jeff Bagby resigned as figurehead of Pizza Port Brewing, many speculated the fun events he and Tom Nickel have been running there for almost two decades would cease to exist.  Word going around was this years San Diego Real Ale Festival would be the last.  Here’s an exceperpt from Ballast Point’s latest emailer, sending a fond farewell to the popular fest:

There will be no cask at Scripps Ranch tomorrow as we have lent our cask tapping equipment to the final edition of the greatest firkin festival on the west coast.  That’s right, Pizza Port Carlsbad will host its 15th, and final, Real Ale Festival this weekend.  The festival will run from 4 to 11 pm on Friday the 13th and from 11 am to 11 pm on Saturday the 14th.  Admission is $30 and includes a festival Imperial Pint glass and 8 taster tickets each good for a 4 ounce pour – additional tastes are just $1 each.  All regular fest admissions will be available at the door.

Ballast Point is proud to have been a part of each and every Real Ale fest since the first in 1998.  Our own “Firkin Hoppy IPA” took second place in the peoples choice awards that year (behind Alesmith’s Wee Heavy).  Even though there are now dozens of casks pouring at any given time in our fair city, the end of an era is always a bit sad.  A huge thanks goes out to Tom and Jeff and the whole crew at Pizza Port for introducing the west coast to just how great real, live ale is.  Your hard work has made the world a better place.

And then a note from Tom Nickel, Co-Organizer of these Pizza Port Carlsbad fests.

And while this will be our last Real Ale fest at Pizza Port, I do expect that the festival will be re-born in some sense in the future.  You can count us doing the Strong Ale Festival on the weekend after Thanksgiving in the fall.

So then we asked Jeff Bagby, what’s the deal, is it really the end!!?

This will be the last one that Tom and I will be doing. At least for now. We haven’t ruled out never having another but for now, we have decided with the amount of cask ale that is readily available at brewery tasting bars and beer bars all over has made the interest in the festival a little less excited than it used to be. In a way, we feel this shows that our goal of brining real ale to people has been achieved. In short, we’re parking it for now but aren’t saying never again.

So while this is being deemed as the “Finale”, the door is opened for a new chapter and or a fresh reboot, so don’t cry in your Real Ale this weekend.