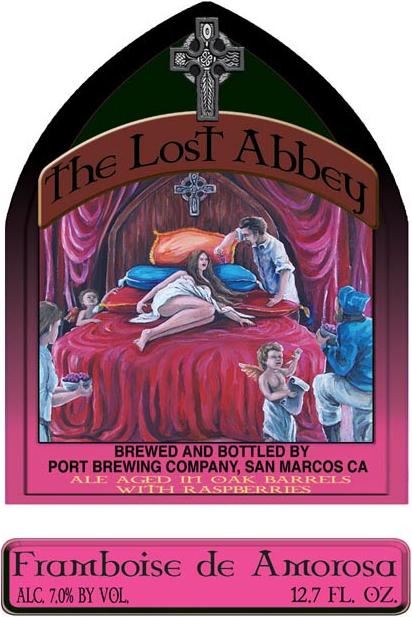 Starting with Lost Abbey’s Lost and Found (Abbey Dubbel w/ Raisins) as a base, then aged in Red Wine barrels with over 30lbs of Raspberry’s added per barrel, Framboise de Amorosa accentuates the tartness and richness of the berry while complimenting the sweetness with funk from the Brettanomyces.

Initial aromas of sweet berry and Brett, Framboise de Amorosa begins with massive notes of sour Raspberries and oak, transforming to a dry and lingering sour finish with a subtle hints of raisins and malt.

Framboise de Amorosa is currently being shipped to the entire Lost Abbey Distribution network, be on the look for it in bottles and limited draft in finer craft beer establishments.
To find the beer near you, visit LostAbbey.com/find-our-beer

About Port Brewing / The Lost Abbey / The Hop Concept
Founded in 2006, Port Brewing, The Lost Abbey and The Hop Concept produce an extensive line-up of continental and American- inspired ales and lagers. Under the direction of visionary brewmaster and co-founder Tomme Arthur, the brewery has garnered dozens of awards in its seven-year history including the 2007 Great American Beer Festival Small Brewery of the Year, The 2008 world Beer Cup Champion Small Brewery and the 2013 Champion Brewery at the San Diego International Beer Festival. The company’s beers, many of which are aged in oak barrels for 12 months or longer, are universally recognized for their complexity, unique flavors and bold boundary-pushing styles. For more information, contact Port Brewing / The Lost Abbey at 155 Mata Way, Suite 104, San Marcos, CA 92069, telephone (800) 918-6816, and on the web at www.LostAbbey.com