The Fort Collins Brewery and Silver Grill Collaborate on Shady 80 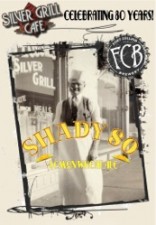 Eighty years ago when the Silver Grill Café opened in Fort Collins, 1933 was a pivotal year for local beer drinking. Prohibition was in full-force in the town of 11,000. Later that year, laws eased and drinking beer and liquor became legal.

Today, with Prohibition a faded memory and micro-brewing a leading local industry, FCB (The Fort Collins Brewery) and Silver Grill Café have teamed to brew SHADY 80, a special ale commemorating the restaurant’s 80th birthday and award-winning shaded back patio.

SHADY 80 — an American Wheat Ale brewed with lemons — will be available for a limited time only at Silver Grill.

“The Silver Grill is a Fort Collins icon,” said John Arnolfo, Silver Grill owner. “The Fort Collins Brewery has brewed a refreshing beer worthy of sipping on our big, shady back patio, or to enjoy during summertime activities.”

FCB will host a tapping party in its Tasting Room from 4-8 pm on Fri., July 19.  On the following Saturday and Sunday (July 20-21) the tasty brew will be featured as part of Silver Grill’s “World’s Largest Bloody Mary Bar.”