(ORANGE COUNTY, CA) – After months of recipe development, The Bruery is unveiling a collaboration beer in partnership with Jeni’s Splendid Ice Creams: Hold The Spoon. Both The Bruery and Jeni’s focus on creating one-of-a-kind flavors utilizing only the best ingredients, making this collaboration a natural marriage of two disruptive brands with fanatic followings. 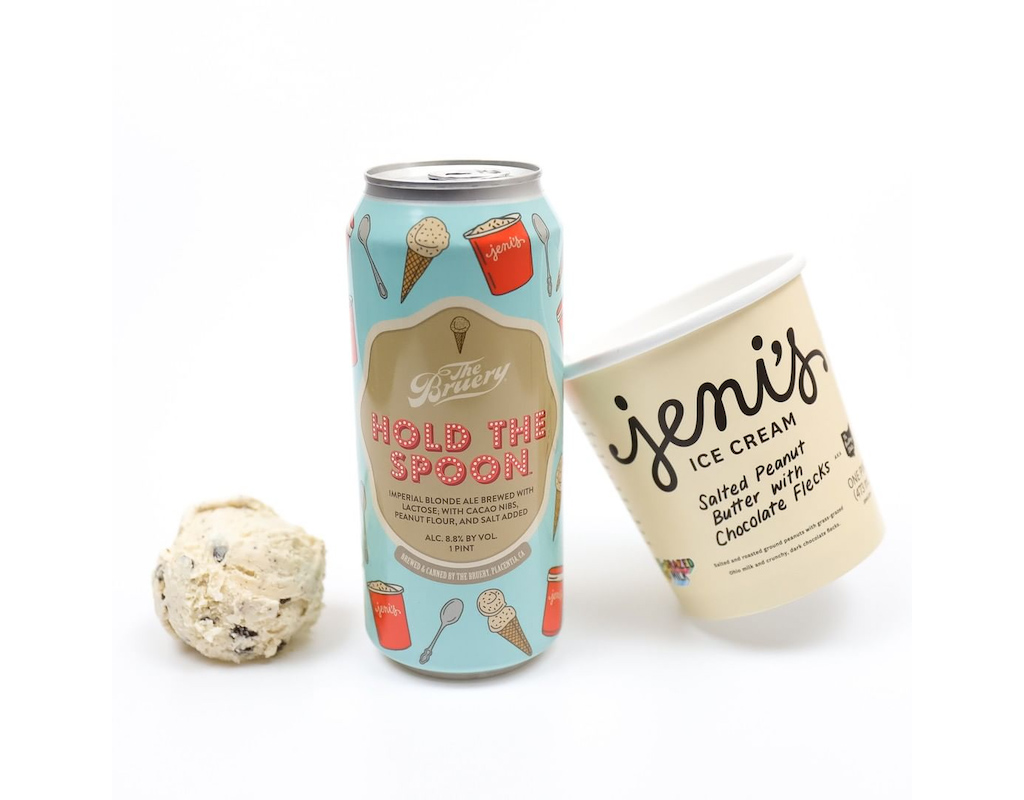 Hold The Spoon is an Imperial Blonde Ale inspired by the flavors of Jeni’s Salted Peanut Butter with Chocolate Flecks ice cream. The Bruery’s innovation manager, Andrew Bell, states, “This was a fun project collaborating with a great craft company from another industry. Tasting through a bunch of ice creams is something we don’t often do at work at a brewery.” The decision to make a beer inspired by this particular ice cream was an easy one, Bell continues. “Jeni’s Salted Peanut Butter with Chocolate Flecks was one of our favorites from the start. It has a bold roasted peanut butter character that is balanced with the creaminess from the dairy, just the right amount of sugar and a surprising salty edge that really made you want to get another spoonful. We made this beer with the simple goal of conveying the wonderful experience of eating Jeni’s Ice Cream in… beer form,” he says.

Jeni Britton Bauer, founder of Jeni’s Splendid Ice Creams, adds, “I was so excited when the Bruery came to us with this idea — and I don’t think they could have picked a better ice cream to turn into a beer. I love everything the Bruery does, and this beer is no exception.”

Hold The Spoon is brewed with lactose, cacao nibs, peanut flour and salt. It’s a full bodied, creamy beer with delicate notes of chocolate and peanut butter. The beer will be available online at www.thebruery.com and in tasting rooms, with a public launch party on March 6 at Bruery Terreux. Hold The Spoon will retail at $5.99 per can.

The Hold The Spoon Launch Party will include ice cream and beer float pairings provided by The Bruery and Jeni’s Splendid Ice Creams. Hold The Spoon will be available on tap with cans of beer available to go.

About The Bruery & Bruery Terreux

The Bruery is a boutique craft brewery located in Orange County, CA that specializes in experimental and barrel-aged beers brewed with tradition in mind. Founded in 2008 by Patrick Rue, The Bruery produces over 50 different beers annually, with 15 seeing national distribution throughout their 27 state network of distributors. In 2015, The Bruery moved its sour beer production to a second facility: Bruery Terreux. The Bruery also runs several exclusive beer clubs including The Preservation SocietySM, The Reserve SocietySM and The Hoarders SocietySM. In 2017, Offshoot Beer Co. was born, offering fresh, hoppy beers.

Jeni’s Splendid Ice Creams is a modern American ice cream company devoted to making the finest ice creams the world has ever known. Founded in Columbus, Ohio in 2002 by Jeni Britton Bauer, Jeni’s has emerged over the past 17 years as the new standard by which all other ice creams (and ice cream companies) are judged. Jeni’s ice creams have a uniquely smooth texture and buttercream body, with bright flavor and clean finish (we don’t use synthetic flavorings, dyes, stabilizers, emulsifiers or off-the-shelf mixes). Jeni’s continues to make one-of-a-kind flavors that sparked the artisan ice cream movement with Direct and Fair Trade ingredients and super fresh milk from family dairy farms. Today, Jeni’s is a Certified B Corporation with 34 scoop shops, an online shop at jenis.com and distribution in top grocery stores across the country.