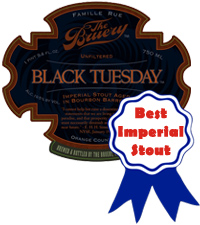 As The Bruery in Placentia, CA nears their second year of commercial craft brewing, their most famous beer to date, Black Tuesday Imperial Stout finds it’s way back into the headlines.  We asked our readers to pick the Best Imperial Stout from a long list, or to write a pick.  Our loyal readers and fans of The Bruery picked the massive 19.25% abv Stout as the winner.  This was a very tough task to do, as we have had many of these Imperial Stouts at thefullpint.com, and we’d be hard pressed to pick one over the other in many cases.  Black Tuesday might be the biggest and one of the rarest, which might have given it a slight edge in the polls.

Other Imperial Stouts that did well in our poll were North Coast’s Old Rasputin, Great Lakes Blackout Stout, and Great Divide’s Yeti.  Through the help of the Bruery’s Facebook and Twitter presence, Black Tuesday lovers went into motion to ensure they won by 51 Votes.

We reached out to the owner and figurehead of The Bruery, Patrick Rue. Here is what he had to say “Thanks to our fans for their excellent judgment in choosing Black Tuesday as their favorite Imperial Stout!  We’re very fortunate to have your support!”  Please stay tuned here at TheFullPint.com for more fun beer polls, more Imperial Stout reviews, and coverage on the 2010 Black Tuesday release, allowing more people to try The Best Imperial Stout!