The Bruery and Cigar City Brewing To Collaborate 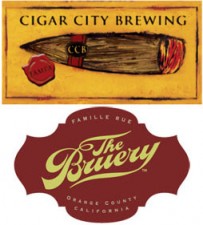 Cigar City Brewing is pleased to announce they will be brewing a collaboration beer with the Orange County based Bruery. The Bruery produces outstanding bottle conditioned, unfiltered ales that incorporate unique ingredients which showcase a skillfull yet wholesome approach to brewing.

We are not ready to announce the style for the collaboration, but in the way of a clue it will be a beer which melds the approach and style of both breweries. It will include two different fruits and it will be aged in unspecified barrels.

It has been tentaively planned for an October/November brew date in Orange County with Wayne Wambles and the staff from the Bruery working together. Given the time this beer will take to create it will, again tentatively, likely be availible in July or August of 2010. So far there is no name for the beer, but we plan on sharing beers with Patrick Rue at GABF and suspect some strong name candidates to arise then.

As far as distribution of this collaborative effort we expect The Bruery/Cigar CIty Brewing beer to be available in all Bruery markets, which is soon to include the Sunshine State.