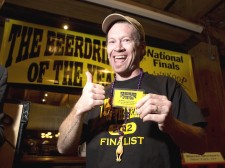 Wilson’s astute beer knowledge, beer ambassadorship (from a town of just 283 people) and a 2011 beer & water fast helped him win the contest.

“He’s a person who really understands and promotes beer,” said Andy Brown, Wynkoop’s head brewer and one of five judges for the finals. “He also had a near-religious experience revolving around beer this year.”

“All three of the finalists were worthy of the 2012 title,” said Jack McDougall, Wynkoop’s first Beerdrinker of the Year and another finals judge. “But in the past year J. showed a total dedication to beer that won us over.”

In 2011 Wilson fasted for 46 days on just water and a dopplebock he brewed with a Rock Bottom Brewery & Restaurant in West Des Moines. His experience became a book, Diary of a Part-Time Monk, and landed him national attention. (Just hours after Wilson was picked as the 2012 winner, an opinion piece Wilson penned about his unique fast ran on CNN.com.)

“With the fast and the book and my other efforts it’s been a very big beer year,” Wilson said after being crowned. “To have it all lead to my winning the Beerdrinker of the Year title, it’s very satisfying. It’s a validation of everything that has happened this past year.”

Wilson is the first Beerdrinker winner to hail from the nation’s heartland, and he lives in a rural area far removed from a rich beer culture. “I don’t live near any beer mecca and I’m a 90-minute drive from a city with a brewery,” he says. “But you can win this contest by doing things in your own community.”

At the finals, Wilson discussed his philosophy for a life rich with beer. ”Having a balance is all important,” he said. “I love beer. But I also truly love my family, and in the grand scheme of things that’s far more important.”

Wilson has a 3-tap, 8-foot home bar supplied by a 10-gallon brewing system in his basement. An advocate for beer for 15 years, he organized numerous beer events in his home state in 2011. (Read his beer blog at www.brewvana.net .)

Winning the title will help him further those efforts. “This will certainly help me with my writings and my beer blog Wilson says. “I want to continue spreading the gospel of great beer to those who’ve not been converted.”

Wilson wins free beer for life at the Wynkoop Brewing Company, $250 worth of beer at his local beer bar (El Bait Shop in Des Moines, Iowa) and clothing proclaiming him the 2012 Beerdrinker of the Year.

Wynkoop’s annual contest seeks out and celebrates America’s most passionate beer lovers. Entrants must have a deep understanding of how beer is made, its many styles and its importance in advancing civilization. They must have a vast array of beer-tasting experiences and be ambassadors for the culture of fine beer.

While in Denver (at Wynkoop’s expense) the finalists enjoyed lodging at Denver’s famed Brown Palace Hotel.

For more details on the Beerdrinker of the Year search and Wynkoop Brewing Company visit www.wynkoop.com.