(ATHENS, GA.) – It’s the most wonderful time of the year! For five years now, early fall at Terrapin Beer Co. has marked the annual brewing one of its freshest, hoppiest beers: So Fresh & So Green, Green. This year’s brew features Simcoe hops grown at B.T. Loftus Ranches in Yakima, Washington. 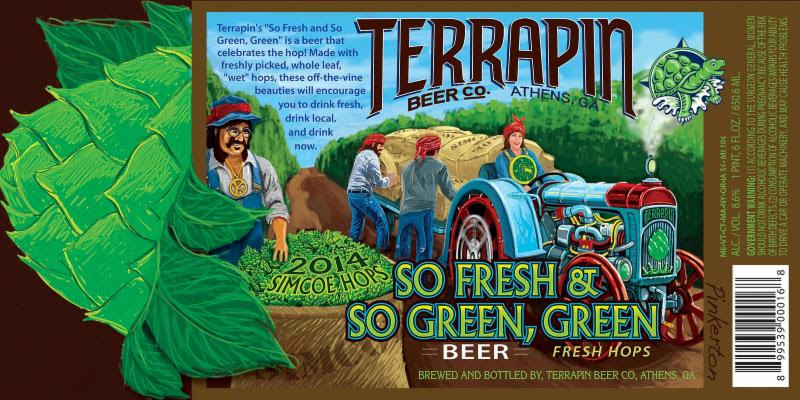 Released annually at the Hop Harvest Festival, which took place this past weekend, So Fresh & So Green, Green is brewed from freshly picked hops from Yakima Valley in Washington. These whole-leaf hops are then overnighted to the brewery in Athens, GA where they are used in the brew, all within 36 hours of being harvested.

Since fresh, or “wet,” hops don’t stay fresh for long, brewing begins almost immediately. It takes almost five times as many fresh hop cones to get the same amount of hoppy bitterness and aroma you’d get from the dried and pelletized hops Terrapin normally uses, so bucket after bucket of hop cones is dumped into each batch of So Fresh & So Green, Green. This labor of love continues around the clock until all batches are brewed and every single one of those fresh hop cones has transformed the wort into what makes this fresh hop beer the brew so many “hop heads” across the Southeast are waiting for.

The hop variety used in So Fresh & So Green, Green changes each year; Terrapin brewmaster and co-founder Brian “Spike” Buckowski recently announced that 2014’s hop is Simcoe. This earthy, citrusy hop is among the most popular in the craft beer industry.

So Fresh & So Green, Green ships during the month of October and will be available in 22 oz. bottles and 1/6 barrel kegs throughout Terrapin’s 11 state distribution network.
About Terrapin:

Terrapin Beer Co. is open to the public for tours every Wednesday, Thursday, Friday and Saturday night from 5:30 p.m. – 7:30 p.m. with live music and tastings. The brewery is located at 265 Newton Bridge Road in Athens, GA. The tours are an excellent opportunity to taste Terrapin’s full line of award winning beers at their freshest and to see the brewing process first hand. For more information visit the website or Facebook page.