(ATLANTA,GA)– As the holidays keep hustlin’ along, SweetWater Brewery has folks covered this winter with a gaggle of gifts sure to give fans the warm and fuzzies. While some are gearing up for the New Year’s ball drop, brewers at SweetWater have been dropping loads of hops into their latest limited release brew – Happy Ending. Meanwhile, brewery elves have been busy building SweetWater 420 Fest’s website to launch early-bird ticket sales just in time to stuff some stockings. 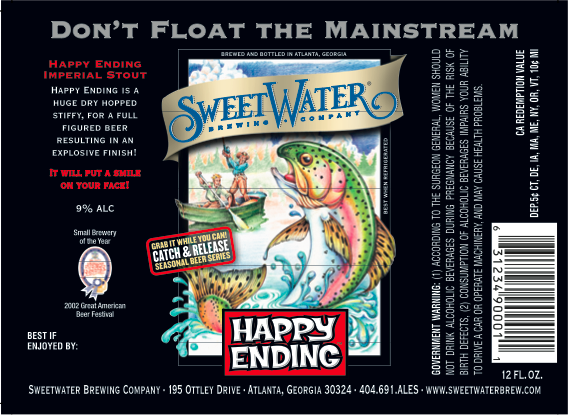 Happy Ending: SweetWater’s brewers are closing out 2013 by delivering a Happy Ending to all, and to all a good night. The Imperial Stout is brewed with Centennial and Willamette hops, and finished off with a dry-hop addition of Cascade and Simcoe hops. Measuring up at 9% ABV, this award-winning beer promises to have fans showing their “O” face.

Happy Ending returns to coolers in six-packs, 22-ounce hand-waxed bombers and draft taps starting the week after Christmas. Drinkers will be able to stock up through the New Year, but the brew hightails out of town in February so folks are encouraged to snatch ‘em up before they’re gone.

SweetWater 420 Fest: Celebrating its 10-year anniversary, Atlanta’s most eclectic and celebrated Earth Day festival – SweetWater 420 Fest – is returning this April promising its biggest and deepest talent lineup to date. The crew is still dialing in the details on the talent lineup, but they are hooking fans up with a limited number of early-bird discounted festival tickets online. SweetWater announced earlier this year that festival headquarters will be moving to Centennial Olympic Park for their 10-year celebration run.

“With this year being our 10th anniversary, we really wanted to dig deeper and bring fans more of the SweetWater experience,” said Director of Marketing for SweetWater Brewery Steve Farace. “We’ve worked hard throughout the last decade as the festival has evolved since its inception, and this year we’re continuing to differentiate our lineup as our new home in Centennial Olympic Park gives us a bigger playground to stretch our out legs in.”

Early bird tickets include a limited number of 3-Day Weekend Passes at $14.20 and 3-Day VIP Pass at $85. To purchase tickets or learn more about SweetWater 420 Festival, visit www.sweetwater420fest.com.

ABOUT SWEETWATER BREWING COMPANY:
SweetWater Brewing Company is an Atlanta‐based craft brewery living by the motto “Don’t Float the Mainstream!” Distribution is limited to the Southeast as SweetWater’s brews are designed to be consumed fresh. The award‐winning lineup of year‐round beers includes SweetWater 420, IPA, Blue, LowRYEder and Georgia Brown. SweetWater also features a Catch and Release series of beers available on a limited basis throughout the year, and an experimental, one‐time‐only Dank Tank series. SweetWater Brewery – located at 195 Ottley Dr. in Atlanta – is open for tours every Wednesday, Thursday and Friday from 5:30‐7:30 p.m., as well as Saturdays and Sundays from 2:30‐4:30 p.m. For more information about SweetWater Brewing Company, please visit www.sweetwaterbrew.com. Hang out with your social thang out and follow SweetWater Brewing Company on Twitter/Instagram @sweetwaterbrew, or become a fan on Facebook at facebook.com/sweetwaterbrew.