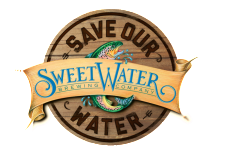 Atlanta, GA – Although water is one of the most vital resources on the planet, waterways continue to decline in quality and quantity in virtually every part of the world. Earth is home to one billion cubic kilometers of water, yet only 2.5 percent is fresh water. Of that, less than one percent is clean and accessible, leaving more than one billion people living without safe drinking water.

SweetWater Brewing Company realizes the importance of protecting these vital water sources and has once again teamed up with the Waterkeeper® Alliance – a global movement of on-the-water advocates who patrol and protect worldwide waterways – for their Save Our Water campaign, supporting the conservation of the Southeast’s most threatened rivers, streams and coastlines. The cause is near and dear to the brewery as clean water is also vital to the creation of their tasty brews.

“Many folks don’t realize that in addition to serving as a source for recreation, fresh waterways, particularly our local Chattahoochee River, supply our main ingredient – water – making up 90 percent of our beer,” said SweetWater Founder and Big Kahuna Freddy Bensch. “Keeping our water source clean is a cause that affects every life form in our community, so dedicating a beer and an awareness campaign was a no brainer for us.”

Kicking off July 4 and running through Labor Day, SweetWater’s Save Our Water campaign encourages patrons to “give of your liver to save the river” by enjoying SweetWater’s seasonal Waterkeeper® Hefeweizen ale, purchasing campaign t-shirts, and making paper fish donations at participating restaurants, bars and retail accounts where the beer is sold across the Southeast. Additionally, patrons can visit waterkeeperbrew.org to donate online, or purchase a custom Save Our Water pint glass at SweetWater’s weekly brewery tours.

In 2011 SweetWater launched Waterkeeper® Hefeweizen, a beer with a cause, helping to spread the campaign’s crusade right on the beer label. Now, as part of their seasonal Catch & Release line-up, the unfiltered brew made its return to shelves and draft taps earlier this June.

SweetWater founded the Save Our Water program in 2006 with its local Chattahoochee Riverkeeper in Atlanta, and efforts grew larger as the brewery did. Since the inception of the program eight years ago, SweetWater has raised more than $700,000 for the cause, with a whopping $150,000 raised in 2013 alone. Today, the Save Our Water campaign supports more than 35 Waterkeeper® members in Southeastern cities where the brewery distributes beer including Georgia, Florida, Alabama, Tennessee, North Carolina and South Carolina, Kentucky, Louisiana and Virginia.

“Waterkeeper Alliance is excited to partner with SweetWater for the Save Our Water campaign,” said Pete Nichols, National Director of the Waterkeeper Alliance. “It’s always refreshing to see the business community step up in the protection of clean water and we’re grateful for their support.”

For more information on the Save Our Water campaign, upcoming events or to donate online, visit www.waterkeeperbrew.org.

About WATERKEEPER® Alliance: Waterkeeper Alliance is a global movement uniting more than 200 Waterkeeper organizations and focusing citizen advocacy on the issues that affect our waterways, from pollution to climate change. Waterkeepers patrol and protect more than 1.5 million square miles of rivers, streams and coastlines in the Americas, Europe, Australia, Asia and Africa. Waterkeeper Alliance was founded in 1999 by veteran Waterkeepers and Robert F. Kennedy, Jr. to insure our global waterways are swimmable, drinkable and fishable. Learn more at: www.waterkeeper.org – @Waterkeeper – Facebook.

ABOUT SWEETWATER BREWING COMPANY: SweetWater Brewing Company is an Atlanta‐based craft brewery following the motto “Don’t Float the Mainstream!” SweetWater’s brews are unpasteurized and designed to be consumed fresh so distribution is limited to the Southeast. SweetWater Brewery, open for tours every Wednesday, Thursday and Friday from 5:30‐7:30 p.m., and Saturdays and Sundays from 2:30‐4:30 p.m. For more information about SweetWater Brewing Company, please visit www.sweetwaterbrew.com – @sweetwaterbrew – facebook