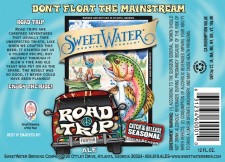 Atlanta, GA – Just in time for some warmer weather, SweetWater Brewing Company is bringing back their fiery pilsner style ale – Road Trip. This full-flavored beverage is a part of the brewery’s Catch and Release seasonal lineup, featured for a limited-time every March through May.

Made from Pilsner and Vienna malts and brewed with Cascade, Sterling and US Golding hops, Road Trip finishes with hints of citrus and herbal hoppy notes ringing in at 5.2% alcohol by volume. Unique for most pilsners, Road Trip is actually fermented at warmer ale temperatures giving it fuller flavor, capped with an intense, spicy hop finish.

“To me the Road Trip is a perfect springtime beer, great for outdoor activities like sitting by the pool or even mowing the lawn,” says SweetWater’s head brewer Nick Nock. “This is our version of a pilsner so it has a light, crisp body with a great hop character, which gives it a zing of spiciness.”

Six-packs of Road Trip will begin stocking up in coolers across the Southeast, while kegs roll out on draft at participating retailers and accounts the week of March 11. Folks will also find Road Trip making a debut in SweetWater’s Tackle Box Variety 12-pack later in the month of March.

Get it while the gettin’s good, because on this Road Trip, nobody rides for free!

ABOUT SWEETWATER BREWING COMPANY:
SweetWater Brewing Company is an Atlanta‐based craft brewery living by the motto “Don’t Float the Mainstream!” SweetWater’s brews are unpasteurized and designed to be consumed fresh so distribution is limited to the Southeast. The award‐winning lineup of year‐round brews includes SweetWater 420, IPA, Exodus Porter, Blue, LowRYEder and Georgia Brown. SweetWater also features a Catch and Release series of beers available on a limited basis throughout the year, and an experimental, one‐time‐only Dank Tank series. The SweetWater Brewery, open for tours every Wednesday, Thursday and Friday from 5:30‐7:30 p.m. and Saturdays from 2:30‐4:30 p.m., is located at 195 Ottley Dr. NE, Atlanta GA 30324.