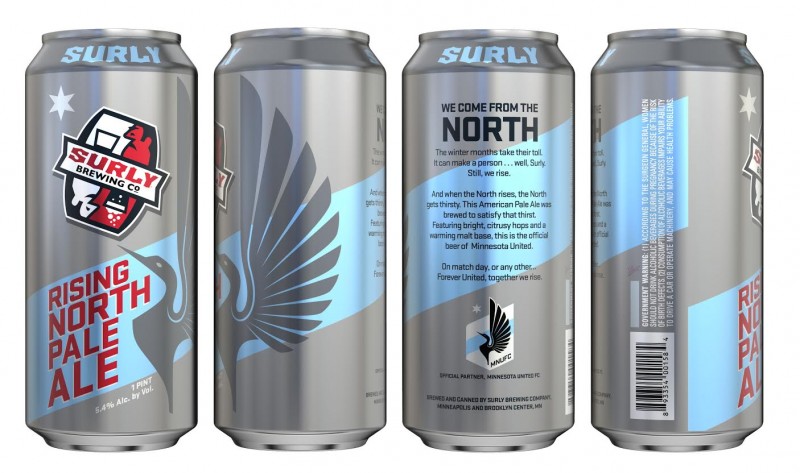 The beer started its life as United Crushers, a beer brewed for match days at TCF Bank Stadium, Surly’s Beer Hall, and some neighborhood soccer bars. The response from fans was overwhelmingly positive, and it was apparent that this easy-drinking pale ale was ready for the big time. Minnesota United agreed.

“Surly is a fantastic local brewery with a long track record of creativity and collaboration when it comes to beer making,” said MNUFC President Nick Rogers. “We’re proud that they’re honoring our arrival in MLS with Rising North and thrilled to be offering it at home matches throughout the season.”

Rising North reflects a team and brewery on the rise. The beer will be available on draft starting today, and then see widespread release in 4-packs of 16oz cans in June.

About Minnesota United
Minnesota United faces the Colorado Rapids on Sunday at TCF Bank Stadium, presented by the Minnesota Corn Growers’ Association. Kickoff is at 5:00 p.m. and single match tickets are still available. It’s not too late to join the Itasca Society. Fewer than 600 spots remain in this exclusive club as we rapidly approach the inaugural season limit of 11,842 members — one for every lake in Minnesota. A portion of all proceeds from these season tickets are donated to the Minnesota Department of Natural Resources’ Loon Monitoring program. Both season and single match tickets are available at MNUFC.COM or by calling 763.4SOCCER.