(MinneapolisMN) – Surly Brewing has dropped a few pieces of news worthy info this week, including distribution into Iowa, Doomtree cans as well as an art contest. Read on for all the details. Cheers! 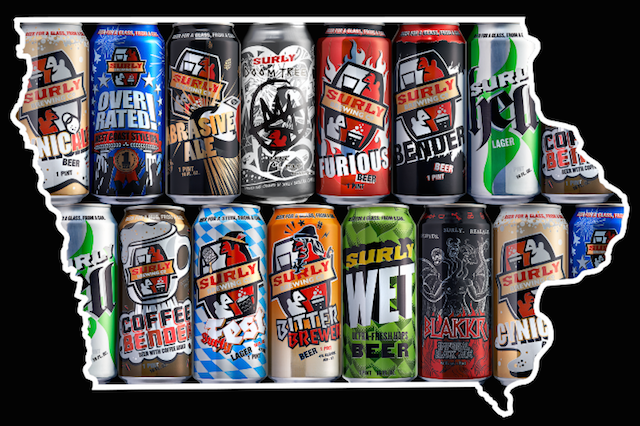 In case you haven’t heard the Surly invasion of Iowa begins Tuesday, March 3 in Des Moines! We’re not visiting, we’re staying. Make room. We’ll roll into town with our friends and collaborators, Twin Cities hip hop collective Doomtree for a special show. The three groups will hit one of either Quinton’s, Mullet’s or Ingersoll Tap for a couple at 5pm, then all head to the Up-Down around 7pm, and then close out the night with a Doomtree show upstairs at Wooly’s.

Wanna join? Meet us in Des Moines for beers and the Doomtree concert. Get your tickets online here while they last: http://ticketf.ly/1A6fNSJ

For the last couple of months Surly Doomtree has been available on tap around the Twin Cities and at the Surly Beer Hall, but tonight, Wednesday, February 25, you’ll be able to get cans at Doomtree’s sold out Minneapolis First Avenue All Hands Tour show. If you got a ticket you’ll be one of the first to drink Surly Doomtree from a can.

If you missed out on a ticket, you can still get your hands on a can tonight – they’ll be on sale next door at The Depot Tavern starting at 4pm before the Doomtree show.

Starting next week you’ll be able to get cans of our collaboration beer at more bars and liquor stores in Minnesota.

Big thanks to Dessa, the rapper/public speaker/philosopher/singer/poet/host/lecturer/writer and now hand model for the pic from her Instagram feed.

Can you draw a turtle, pirate or beer-drinking mythological monster? Wanna stick it to everyone who said your art was a waste of time? We’re looking for this year’s Surly Featured Artist! We’re continuing our annual tradition of picking one artist, who this year will create the art for SurlyFest 2015, Darkness 2015 and our 10th anniversary beer in 2016. The art will be featured on bottles, posters, shirts, tattoos, etc.

This isn’t just for recognition and free beer-this is a paid gig. So, we’re expecting the artist we choose to work through concepts and designs with the crew at Surly and deliver on a specific timeline. The art can be in any format–we’ll take care of the production details.

If you are interested, like Surly beer, and don’t suck at art, send some info about yourself, your connection with Surly, and examples of your previous work (links to your portfolio, etc.) to [email protected] by Wednesday, March 11. We’ll check out your stuff, discuss with previous Surly artists, and either let you know you’re a finalist, or crush your hopes with rejection. If you’ve already sent artwork last year, you can send it again.