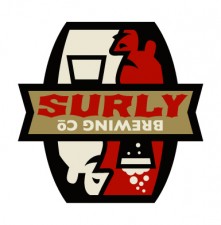 Minneapolis, MN – Surly Brewing Co. broke ground today and raised a glass to its new home, a $20-plus million brewery that will become a destination fit for one of the largest and most popular craft brewers in the state.

The development, which is planned for completion in late 2014, will allow Surly Brewing to increase beer production by almost four times, to 100,000 barrels of craft beer each year, as well as accommodate hundreds of craft beer fans in its 300-person beer hall and beer garden. A full-service restaurant and events center will also be introduced in the second phase of development.

To kick off the construction, Omar Ansari, founder and president of Surly Brewing and his team invited local dignitaries, including Minneapolis Mayor R.T. Rybak, and project stakeholders to deliver remarks and join Surly in tapping the first of many kegs of Surly beer at the Destination Brewery.

“Today is an opportunity to thank our fans, the Twin Cities, the state, and all of our partners for their support,” said Ansari. “We’ve worked hard for the last two-and-a-half years to ensure that this brewery truly is a destination for all craft beer fans, and it’s placed perfectly in the center of the Metro right between Minneapolis and St. Paul. We’re looking forward to creating something really special that everyone will be able to enjoy by the end of next year.”

Surly Brewing has been supported throughout this process by elected officials, government staff, the Prospect Park and surrounding neighborhoods, and Surly Nation, Surly’s loyal and vocal fans.

A Home Fit For a Destination Brewery
In April 2013, Surly purchased the 8.3 acres of land at 520 Malcolm Avenue SE in Minneapolis. Surly and its local real estate consultants TEGRA Group spent two years vetting more than 80 possible locations in 30 cities around the Metro.

The Malcolm Midway site was chosen as it is large enough to accommodate the infrastructure for the 100,000 barrels per year production brewery and potential growth beyond. It is close to major roads, bicycle routes and two stations on the Central Corridor light rail line.

Environmental cleanup specialists Barr Engineering will be working alongside Twin Cities-based McGough Construction to clean and prepare the site for the Destination Brewery. The McGough team will continue to work with Surly Brewing, HGA Architects and TEGRA as construction of the actual brewery gets underway. McGough has built notable Twin Cities landmarks such as the Guthrie Theater and Ordway Center.

From an Idea to a Law Change
Surly Brewing began planning for the Destination Brewery development in late 2010 and in early 2011 it announced plans to build a $20 million facility that was contingent on changing a Prohibition-era Minnesota law. Previously, Minnesota did not allow production breweries to sell pints of their own beer on premises, something that was critical to Surly Brewing’s plan. To change the law Surly, other local breweries and their partners kicked off the Power of the Pint campaign, which called on the state’s craft beer fans to contact their local legislators to enable growth for local breweries.

The response was unbelievable and was enough that, in May 2011, Gov. Mark Dayton signed the omnibus liquor bill which included provisions for a “Taproom License” that allowed Minnesota breweries that produce less than 250,000 barrels of beer to sell pints of their own beer on their premises. Since the bill was signed, more than a dozen Taprooms have opened across the state.

Support for the Vision
In 2012, Surly and TEGRA pared down location options to a handful of viable sites for developing the Destination Brewery, and the Malcolm Midway site was top of that list. The site required environmental cleanup to accommodate the plans. Barr Engineering kicked off environmental remediation today.

Surly applied through the City of Minneapolis for more than $2.5 million in grants to assist in the cleanup. It has been awarded a grant totaling almost $2 million from the State of Minnesota through the Department of Employment and Economic Development Contamination Cleanup Program, the Metropolitan Council through its Metropolitan Livable Communities Fund and Hennepin County through its Environmental Response Fund. Hennepin County also will provide loans to Surly Brewing from its Transit-Oriented Development program and the U.S. Environmental Protection Agency’s Brownfields Cleanup Revolving Loan Fund administered by Hennepin County Environmental Services.

In addition to helping secure and then administering the three cleanup grants, Surly Brewing was also supported by the City of Minneapolis in the site search process guiding the project through the various city review and approval processes and approval of a Phased Development Program to allow Surly Brewing more time to use the Sewer Availability Charge credits on the Malcolm Midway site.

It’s been a group effort to get to this point in the development of the new Surly Brewery and excitement is building.

“I’ve said it before and I’m happy to say it again, Minnesota Nice is about to get Surly. The City of Minneapolis and Surly Brewing have been great partners over the years,” said Minneapolis Mayor R.T. Rybak. “We rallied the voices of activists across the state together to pass the bill that allowed this project to move forward, then worked together to transform this formerly blighted site into a Destination Brewery and the next Minneapolis beer hot spot. Our partnership is a great example of small business and government working together to create good jobs in manufacturing, hospitality and tourism — and, let’s not forget, a really delicious local product.”

About Surly Brewing
It all started in Omar Ansari’s garage in 1994. He liked beer, felt it should be brewed a certain way, and had expectations of what defined good beer. The motivation for the big idea was the fact that Ansari, along with current (and soon to be) beer lovers were growing “surly” because they couldn’t find enough good beer. A space was procured in 2005, previously the home of his parents’ abrasives manufacturing business – the very building used by Omar’s Pakistani father and German mother to build their own business 40 years before. By the end of 2005, Ansari and head brewer Todd Haug put the finishing touches on their big idea and all systems were finally ‘go’: Surly sold its first keg on February 2, 2006, and has never looked back. Now, seven years later, after unbelievable growth and an expanding family of beers, Surly is served at more than 500 Minnesota bars and restaurants and has received several national beer awards.