Summer Of Change For Bootlegger’s Brewing 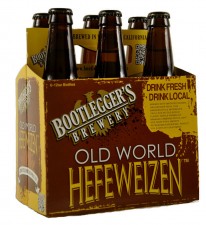 With a move into two new facilities, the introduction of six-packs, and a complete label redesign, Bootlegger’s Brewing is in the middle of a summer filled with huge change.

New Facilities
The current Bootlegger’s facility is home to all production and transforms into a tasting room from Thursday to Sunday. In August the brewery will be moving into two separate facilities, a tasting room located in Downtown Fullerton’s SOCO district, and the other, an 11,000 square-foot facility that will be used strictly for production.

Six-packs are coming
Six-packs of Old World Hefeweizen are hitting shelves this week. After previously only bottling in 22 ounce bottles, this is the first time that Bootlegger’s has bottled in a 12 ounce format.

“Our plan is to release product in several different formats,” says owner Aaron Barkenhagen. “The 12 ounce bottles are the first step into new packaging, which will be sent out in six-packs and eventually 12 packs. Down the line we plan on packaging in cans and who knows what else.”

Before the end of summer, fans of the brewery can expect to see six-packs of Palomino Pale Ale and Rustic Rye IPA in stores.

Label Redesign
You might notice a change on the shelves this summer, and that’s because Bootlegger’s has put all of their labels through a redesign. While some of the labels look similar, other labels have gone through complete overhauls, so make sure to look for the familiar gold eagle.

About Bootlegger’s Brewery
Bootlegger’s Brewery from Fullerton, California, has been brewing since 2008. Not bound to any style limitations, Bootlegger’s makes beers in a wide variety of styles that everybody can enjoy. In true Bootlegger fashion, the first keg was delivered in April 2008 in the back of a pick-up truck and the rest is history. For more information visit www.bootleggersbrewery.com – @bootleggersbrew – facebook