Stone Xocoveza for the Holidays & the New Year Returns

(ESCONDIDO, CA) – Some things are just too good for the world to be deprived of them. This is true for Stone Brewing Co.’s re-release of the delicious and wildly popular beer that was introduced last year in 22-ounce bottles as Stone Xocoveza Mocha Stout. It was an instant hit. Because craft beer enthusiasts voiced fervent adoration via social media and online forums, Stone was inspired to embrace the joyous spirit of giving and rebrew this milk stout infused with cocoa, coffee, peppers, vanilla, cinnamon and nutmeg. Starting this week, the beer is making a comeback in 12-ounce six-packs and on draft at select retailers, restaurants and bars nationwide. 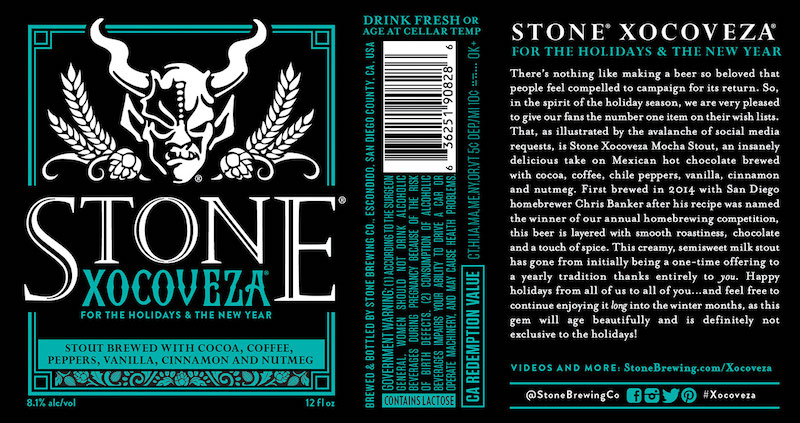 First brewed in 2014 with San Diego homebrewer Chris Banker, this Mexican hot chocolate-inspired creation was named the champion of Stone’s annual homebrew competition. Thanks to the adoring public, this creamy, spiced stout has gone from initially being a one-time offering to a yearly limited release. While returning with new, winter-influenced packaging and a new name, “Stone Xocoveza for the Holidays & the New Year,” the tasty, complex recipe remains the same.

“Since this beer first arrived on store shelves and on tap, Stone fans and team members have clamored for more,” said Stone CEO & co-founder Greg Koch. “We felt compelled to bring back one of our most popular and beloved beers as a way of thanking those who voiced their opinions. Now, Stone Xocoveza for Holidays & the New Year will be a yearly tradition we can all eagerly anticipate.”

When re-creating Banker’s original recipe, unconventional brewing ingredients were used to emulate the rich, robust flavors of Mexican hot chocolate. Cocoa and milk sugar added during the brewing process gives the beer another level of sweetness. Coffee provided by San Diego-based roaster Mostra Coffee, pure cocoa from Southern California’s ChocoVivo and vanilla give the beer a rich, roasty flavor. Cinnamon, nutmeg and a small dose of pasilla peppers create a medley of piquant aromas. The malt bill offers the beer a strong backbone for all those flavors and aromas, while English Challenger and English East Kent Golding hops provide the perfect amount of bitterness to harmonize with the flavorful diversity.

Stone Xocoveza for the Holidays & the New Year may be enjoyed fresh or stored at proper cellaring temperatures for months or even years. Over time, the malt character will evolve, making the cocoa and coffee flavors more prevalent.

About Stone Brewing Co.
Founded by Greg Koch and Steve Wagner in 1996, San Diego-based Stone Brewing Co. is the 9th largest craft brewer in the United States. Stone has been listed on the Inc. 500 | 5000 Fastest Growing Private Companies list 11 times, and has been called the “All-time Top Brewery on Planet Earth” by BeerAdvocate magazine twice. The multifaceted company will be the first American craft brewer to own and operate its own brewery in Europe, and is also building a production brewery and destination restaurant in Richmond, Virginia. Brewing at both locations is anticipated to begin in spring 2016. Known for its bold, flavorful and largely hop-centric beers, Stone has earned a reputation for brewing outstanding, unique beers while maintaining an unwavering commitment to sustainability, business ethics, philanthropy and the art of brewing. For more information on Stone Brewing Co., please visit stonebrewing.com or the company’s social media sites: Facebook, Google+, Instagram, Pinterest, Twitter and The Stone Blog.