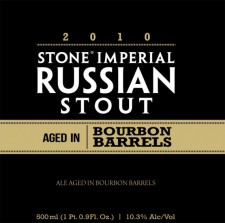 Last week, Stone quietly released 2010 Stone Imperial Russian Stout Aged in Bourbon Barrels at their Stone Company Store.  A few locals took to twitter, claiming they were getting half filled bottles. Yesterday, Erick Gordon of the Escondido location sent out this quick memo regarding the production flaws they’ve encountered.

We’ve unfortunately discovered that some of the 500ml bottles of 2010 Stone Imperial Russian Stout aged in Bourbon Barrels we sold in our stores were not up to our standards, so we’ve decided to pull them from our shelves. We’re bummed about it, but we’re taking it VERY seriously and we’re looking into ways to ensure that something like this doesn’t happen again. We are GLADLY issuing refunds to anyone who returns their bottle—full, empty, or somewhere in between—to any of our Stone Company Store locations: Escondido, South Park, or Oceanside, with our sincerest apologies. No questions asked.