(Escondido, CA) – There’s a lot ‘neverending’ about IPAs at Stone. Beginning with Stone IPA being one of the very first and most popular West Coast style IPAs on the planet, to the company’s celebrated explorations of double IPAs, fruited IPAs and ultra-fresh triple IPAs. But drinking a bold, badass Stone beer at 4% ABV has been nothing more than a hallucination, until now.  Stone Brewing announces the release of Stone Neverending Haze IPA, a low-ABV IPA delivering a triumphantly bold hit of flavor. 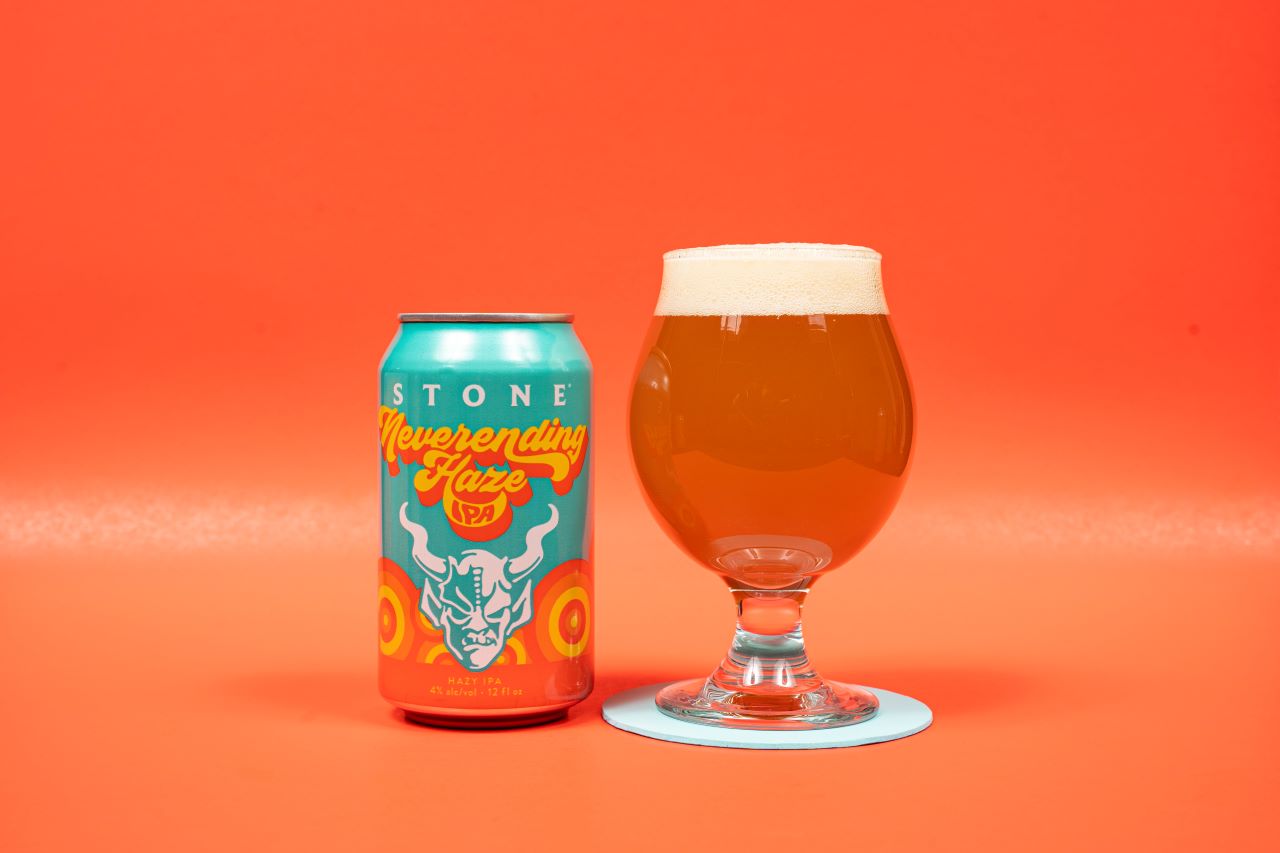 There’s no blowing smoke here – this beer is something special. It’s the haziest you’ve seen from Stone. It’s uncharacteristically low in alcohol and the team’s brewers nailed the trifecta by delivering that intense flavor that is uniquely Stone. The sum of the parts is a neverending good time. What’s more, this beer is the first in the 2020 Stone Pilot Series Program, a trio of special releases on trial for placement in Stone’s full-time lineup of beers.

Visibly hazy and golden orange, Stone Neverending Haze IPA lets off dank aromas of orange peel along with floral notes. Citrus flavors of orange and lime are intense up front, followed by oats, pineapple, star fruit and sweet strawberry preserves. Like all well-executed hazy IPAs, it’s pleasantly weighty on the palate thanks to the addition of roasted malts and oats. The finish is dry with the slightest bitterness (lest Stone ever forget its roots) and just the right tangy tartness to refresh and implore another sip.

So how did the team dream up such a soul manifesting experience? Alongside mad skills, credit is due to none other than… the yeast. Senior Manager of Small Batch Brewing & Innovation Steve Gonzalez has been experimenting with different yeast strains for years and recently employed a centuries-old, but recently available Norwegian strain called Voss Kveik, which produces intense orange citrus notes that complement the intense fruit aromas and flavors of Mosaic and Citra hops. It’s a total trip.

Stone Neverending Haze IPA is a special release beer available in 12oz six-pack and 12-pack cans and on draft beginning the week of December 16, 2019 in California and January 1, 2020 nationwide. So, while there’s a lot of talk about the good times neverending, this beer will peace out in a matter of months – unless it earns enough love for that coveted year-round spot.

About Stone Brewing
Founded by Greg Koch and Steve Wagner in 1996, the groundbreaking San Diego-based Stone Brewing is the 9th largest craft brewer in the United States. Recognized as an award-winning industry leader, Stone has been listed on the Inc. 500 | 5000 Fastest Growing Private Companies list 12 times and has been called the “All-time Top Brewery on Planet Earth” by BeerAdvocate magazine twice. The multifaceted company operates brewing facilities in Escondido, CA and Richmond, VA, in addition to tap room locations throughout the US, Germany and China. Known for its bold, flavorful and largely hop-centric beers, Stone has earned a reputation for brewing outstanding, unique beers while maintaining an unwavering commitment to sustainability, business ethics, philanthropy and the art of brewing… and pledging to never, ever, sell out to the man.  For more information on Stone Brewing, please visit stonebrewing.com or the company’s social media sites: Facebook, Instagram and Twitter.