(STEVENS POINT, WI)-Whole Hog Espresso Stout, the latest “big beer” in the Stevens Point Brewery’s Whole Hog Limited Edition portfolio, is proof that coffee and beer are made for each other.

A delicious, jet-black beer with a distinctive coffee flavor and aroma, Whole Hog Espresso Stout is year-round beer available now in four-packs of 12-ounce bottles and on draft in 16 states where Point’s Whole Hog products are sold, mainly in the Midwest and on the East Coast. 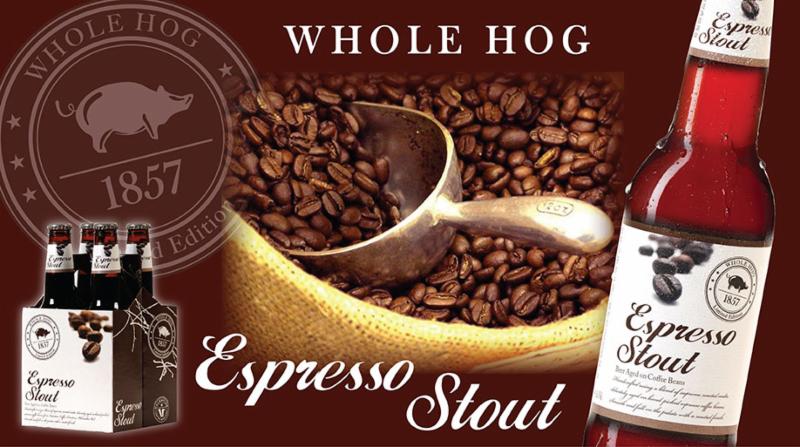 To select the right coffee beans for brewing Whole Hog Espresso Stout, the Point Brewery collaborated with Robb Kashevarof and Joe Gilsdorf of Valentine Coffee Roasters. Hopkins traveled to Valentine’s tasting room and roasting operation on Milwaukee’s west side to sample various coffees and learn about coffee brewing methods. Gilsdorf and Kashevarof, in turn, visited the Point Brewery to learn about its handcrafted specialty craft beers.

Kashevarof, Valentine’s Owner and President, characterized the process as finding the sweet spot. “We recognized that Stevens Point Brewery has a commitment to quality and balance just as we have,” he said. “It’s all about finding the right balance, and the coffee beans we selected deliver just the right balance of flavor for the malts Gabe uses for Whole Hog Espresso Stout. The result is an extraordinary beer that is much greater than the sum of its parts.”

“The Sumatra beans add a touch of fruitiness to the flavor, which distinguishes Whole Hog Espresso Stout from other coffee beers in the marketplace,” Hopkins said. “When you taste Whole Hog Espresso Stout, you first encounter chocolate notes plus the fruity notes from the Sumatra coffee on the front end. On the back end you experience the delicate roasted coffee flavor and aromatics contributed by the espresso beans.”

Coffee beers are a small but growing segment of the craft beer industry, according to Joe Martino, Stevens Point Brewery Operating Partner. The coffee beer category at the recent 2014 Great American Beer Festival in Denver, the U.S. craft brewing industry’s annual celebration, featured 116 entries; there were just 52 coffee category entries at the 2010 festival.

The Whole Hog Limited Edition brews, handcrafted in small batches to appeal to the most discerning craft-beer aficionados and round out the Stevens Point Brewery’s portfolio of craft beers, represent the epitome of the brewmaster’s art.

Tours of the brewery are available, with schedules listed here.