(STEVENS POINT, WI) – Point Bock has returned to the Badger State for the winter of 2015. 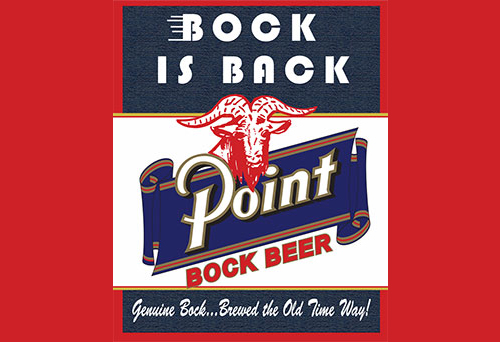 Eagerly anticipated by bock beer fans each January for decades, the malty seasonal brew is available now on draft only in select Wisconsin markets through March while supplies last. Click here for a list of accounts in the Stevens Point area.

Point Bock’s origins can be traced back to 1938. Point resurrected the rich, dark amber German-style bock beer just for Wisconsin after Point Brewmaster Gabe Hopkins dusted off an old recipe from the late 1980s that he found in the brewery’s archives. A retro tap handle crowned by a vintage Point Bock logo featuring a goat’s head – “bock” means billy goat in German – supports the reintroduction of the handcrafted brew in Wisconsin bars, taverns and restaurants.

“Point Bock is a hearty brew, very malty and sweet with a big body,” Hopkins said. “Smooth and easy to drink, it’s a perfect cold-weather beer that pairs well with hearty fare like roast beef.”

Bock is a centuries-old style of German lager beer, traditionally brewed each year in winter for consumption starting in the early spring. German immigrants who flocked to the America in the mid-19th century brought with them their taste for bock beer and the knowledge to brew it, according to Joe Martino, Stevens Point Brewery Operating Partner.

Point Bock is also a tradition for running enthusiasts in central Wisconsin, sponsoring the first Point Bock Run in 1982. The 2015 Point Bock Run is scheduled for Saturday, March 7. The 5-mile road race, limited to the first 2,000 runners (registration is closed), starts and finished at the Point Brewery and crosses the nearby Wisconsin River twice.

Point Bock is available primarily in Stevens Point Brewery’s core markets in central Wisconsin, with some distribution in the Milwaukee and Madison metro areas.

For more information about the Stevens Point Brewery, please visit pointbeer.com or call 1-800-369-4911. Tours of the brewery are available; schedules are listed on the website.