(San Francisco, CA) – Powerful, decadent, united by barrels and graceful age, Syndicate No. 03 is ready to break from the shadows. This long awaited beer by Speakeasy Ales & Lagers, the third installment of the Syndicate Series, features a blend of strong ales aged in American spirits barrels for no less than twelve months. Syndicate No. 03 will be released in a limited number of 22 oz. bottles and kegs beginning December 11th in their Tap Room. 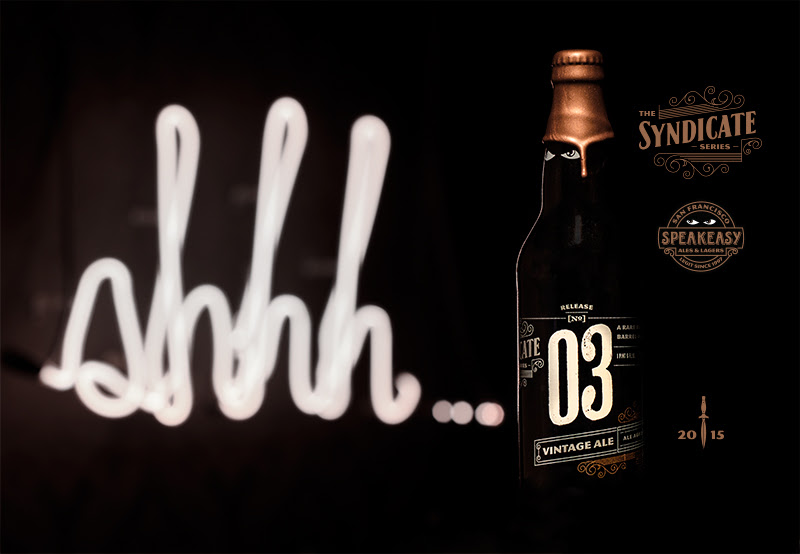 Syndicate No. 03 is a blend of seven different strong beers matured between 13-37 months in bourbon barrels. Every barrel in Speakeasy’s collection was sampled and carefully considered to create the final blend. Together they form an elegant, delicious, and complex brew, that won’t be repeated.

The beer pours black as night with a golden brown head. Aromas of vanilla, coffee, oak, molasses, licorice, dark chocolate, and toffee, rise from the glass. Upon first sip, chocolate and coffee flavors continue to build, coalescing with raisins, dates, currants, a touch of black pepper, and tobacco. This beer is dessert, reminiscent of rum cake and tiramisu, but it’s not overly sweet. It’s balanced, creamy, medium to full bodied, with a toasty finish at 10.5% ABV.

Syndicate No. 03 will be released for the first time on draft and in bottles at Speakeasy’s Tap Room on Friday, December 11, at 1pm. It will start arriving in stores the following week, first in the San Francisco Bay Area, then throughout a select number of U.S. states. Speakeasy recommends aging Syndicate No. 03 for at least six months. It will reveal new flavors and complexity over time. Serve the beer at 50-55° to enjoy its full character.

About the Syndicate Series
Each Syndicate Series release is a blend of strong ales that have been aged in American spirits barrels for no less than twelve months. Each year the blend is unique and will never be repeated. The Series was launched in 2013 with the creation of Syndicate No. 01.

About Speakeasy Ales & Lagers
In 1997 a wily band of bootleggers led by homebrewer Forest Gray were inspired to bring their exceptional brews from the underground to the masses, defiantly producing small batches of beer in a secret warehouse in San Francisco. Starting with a single, iconic beer, Prohibition Ale, Speakeasy now brews a wide array of acclaimed beers including Big Daddy IPA, Payback Porter, Double Daddy, Scarface Imperial Stout and many more, which are distributed across the entire West Coast and other major U.S. markets.