YeeeHawww!!! As of last weekend, Snake River Brewing has another Great American Beer Festival (GABF) award. This years winner was AK Session which won a silver medal for brewing excellence in the Mild Brown Ale category.

Snake River now boasts 26 medals from the GABF since opening in 1994 and we continue to be the most award-winning small brewery in the USA. The grand finale of summer festivals, the GABF completed another banner season for SRB. With a smattering of summer varietals and the ubiquitous foursome of SR Pale Ale, SR Lager OB-1 Organic Ale and Zonker Stout competing in different categories across six festivals, Snake River never came home empty handed. 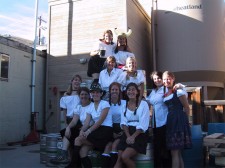 Snake River Brewing will once again be honoring the annual tradition of Oktoberfest. Join us for the festivities starting at noon on Wednesday, October 7th, as we turn our Brew Pub into an authentic German beer-hall serving traditional Bavarian foods and brews!

Salzberger Echo, the live “Oom-Pah-Pah” band will be on hand in the evening with their Tyrolean music, elk-horns and bells starting around Happy Hour. So bring your leiderhozen and be prepared to bust out the “Chicken Dance”!

On tap you’ll enjoy our Alpine Fest Oktoberfest which will be released on that day, along with our Rolling Thunder Dortmunder and six other incredible brews.

Executive Chef, Ryan Brogan will be serving up a traditional fare of German foods, including Bier-Rocks, brats, .sauerkraut, pork-shank, a sausage plate and spetzl. YUMMMM!!!

This is our biggest day of the year and we’ll have additional beer and food stations to satisfy your Oktoberfest needs! And hey…don’t forget that our SRB Beer-Maids will be adorned in their dirndls serving up liters of lagers and our traditional German bill of fare!

The Pigskin is on the Field and the Holidays are Right Around the Corner…
As the weather gets a little chillier and the leaves start dropping from the trees, fight the urge to hibernate and come on in to the brewpub! We have all the football games (college and NFL) via Direct TV playing on our 12 flat-screens, along with menu items to match. Our insanely incredible hot-wings will be available and don’t forget “MugDay Night Football” where if you bring in your liter stein, refills of Pale, Lager and Stout are only six bucks!

Looking for something for that special someone for the holidays? Bust a move to our Web site and grab some SRB love in the form of some swag or beer that we can ship to them directly.