email
(Torrance, CA) – Smog City Brewing Co. is celebrating their anniversary on April 28th with the release of their 2018 anniversary beer, Awkward Teenager. The 2018 anniversary beer is a super hoppy farmhouse ale with tropical fruit and is truly a unique beer that will be the perfect companion to the day’s festivities. 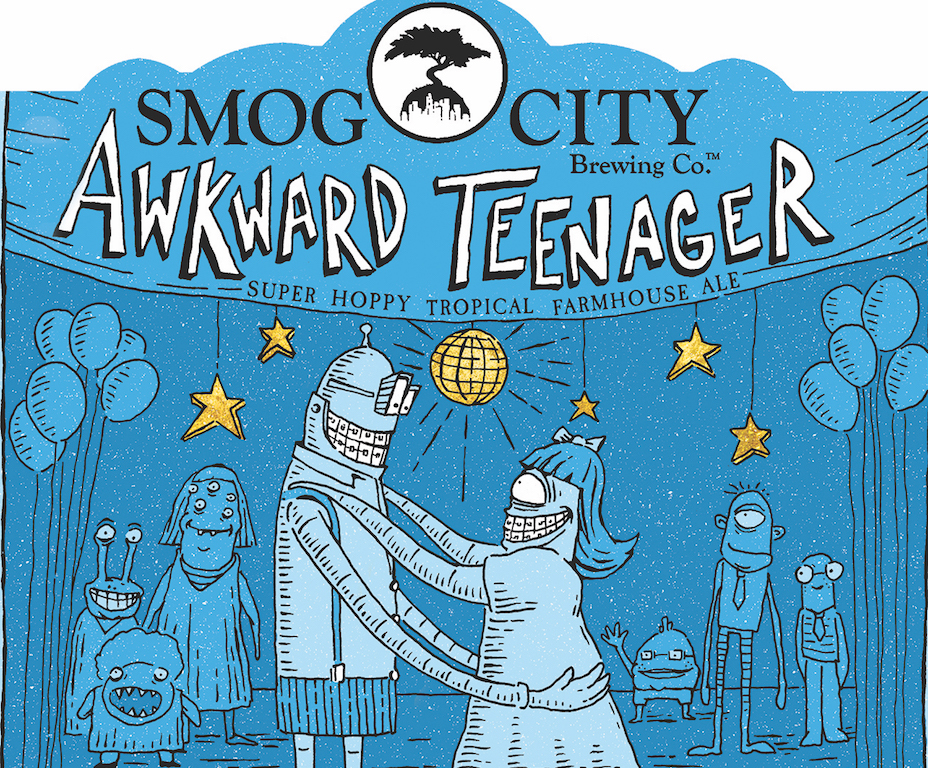 Awkward Teenager is a fruit forward Saison, brewed with guava and tangerine and dry-hopped with a generous amount of Citra and El Dorado hops to add that super hoppy bitterness and aromatics so many people crave. Awkward Teenager is an easy drinking beer, ringing in at 6% ABV, and is exceptionally food friendly. Smog City Brewing Co. strives to brew creatively inspired beers and this year’s anniversary beer is no exception. The name is a reference to where Smog City Brewing Co. feels its business is at this current moment in time – those awkward teenage years when your arms were too long and your feet too big. They look grown up but are still knocking things off tables and tripping over themselves, yet feeling the exhilaration of all that potential.

“Our anniversary beer is something we try to be pretty experimental with. We use it as an opportunity to do something fun and different,” said Jonathan Porter, owner/brewmaster of Smog City Brewing Co. “When figuring out what to make this year, I immediately thought of a Saison, which to me is the perfect beer style. The style hits on a lot of fruity notes and from there we thought, why not dry-hop it? With this brew, we were able to add layer upon layer of tropical fruit and hop flavors and aromas to make a unique, but truly Smog City beer. We make what we want to drink, but we also really want people to love it. Awkward Teenager gets the job done and we can’t wait to share it with everyone.”

In addition to the anniversary celebration, there will be a series of pre-anniversary events held around Los Angeles to gear up for the party. These events will feature curated lists of Smog City beer, including rare finds. You’ll have to show up for the main event at the brewery on April 28th to get your hands on Awkward Teenager, however!

Established in 2011, Smog City Brewing Co. is a brewer owned and operated craft brewery in Torrance, CA. We are devoted to producing creatively inspired and exceptionally balanced beers; each a celebration of whimsy and independence because to be normal is just that. So join us in embracing different and enjoy our vast array of quirky quality beers.