Fort Mill, SC – The Skull Coast Ale Company is proud to announce the imminent arrival of its debut ale, Maelstrom IPA. India Pale Ales were originally brewed at a higher gravity to survive long voyages in the 1700s. Today, IPAs are produced to quench the thirst and tantalize the taste buds of craft beer lovers and “hopheads” everywhere.

Maelstrom IPA only uses the finest ingredients on the market. A number of specialty malts, including Maris Otter, Victory and Carastan, give this 7% ABV ale a massive body and perfect color. This drier, less caramelly, foundation provides the perfect platform for the company’s proprietary hop addition schedule, adding premium Northwest hops almost constantly over 90-minutes. The double-digit number of hop additions create a smooth, balanced bitterness with tons of flavor and a wonderful aroma. 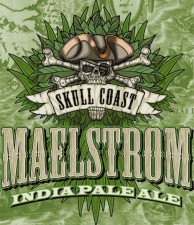 The hop additions, however, do not stop at the kettle. Another pound per barrel of “dry hops” are added during conditioning to give the Maelstrom IPA even more aroma. These 25 additional pounds of hops are a combination of five (5) complimentary Northwest hops to give it a one-of-a-kind hop punch and complexity. With all the additions from the kettle through “dry hopping”, it clocks in at an astounding 85 IBUs. It’s easy to see why it’s called, the “Maelstrom IPA.”

Maelstrom (pronounced “Mail-strum”) is a powerful tidal whirlpool or swirling vortex with a considerable downdraft in the ocean. A visual representation of a Maelstrom can be seen in the climax scene of the “Pirates of the Caribbean 3: At World’s End.” It’s one of the reasons why Skull Coast calls the Maelstrom IPA a “Delirious Descent into a Maelstrom of Hops.”

The Skull Coast Ale Company creates big, bold, high-end ales that celebrate the people, culture and history of the Carolinas during the Golden Age of Piracy. For more information please go to: http://www.skullcoastales.com