(Brooklyn, NY) – RESIN DAY is back… and we’re back at the brewery at 40 Van Dyke Street in Brooklyn for this release! We’ve got two brand new Resin-inspired brews formulated by Sixpoint Brewmaster, Eric Bachli, and we’re bringing back Anti-Res a little more than a year after we first released it. Atomic-Res is a huge, Hi-Res inspired, Triple NEIPA with hop hash that takes it next level. Shatter is Extra Dank—meaning the hop blend we used is super resinous with notes of fresh weed. 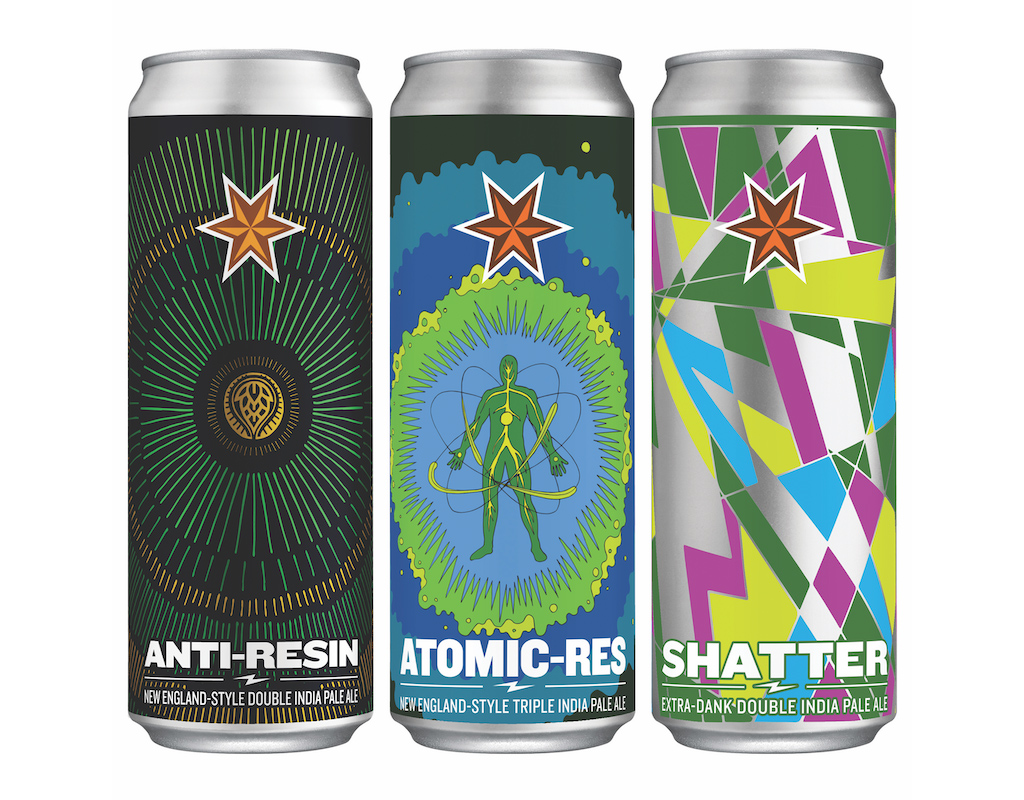 We’re amped to be back in the courtyard for this one. All Resin beers go on sale through the Sixpoint App Monday Feb 25th at noon EDT (sold at full price, not a reservation fee). Release party for local pick-up: Saturday 3/2 from 11-5pm, with alternate pickup Wednesday 3/6 from 5-7pm.

Anti-Resin
NEIIPA ft. a Proprietary Resin Hop Blend
9.1% ABV
0 IBU
Dive deep into the hop cone… but leave the bitterness behind. This beer utilizes New England IPA techniques to create a huge tropical aroma with a smooth body and low bitterness. Welcome to the bizarro world.

Shatter
Extra Dank IIPA w/ Strata, Idaho 7, and CTZ
8.7% ABV
60 IBU
We’re talking the straight up dankest, most potent beer we can make. Heard of Strata? It’s a new strain out of Oregon that’s shattering expectations—it’s got a huge aroma of lush fruits plus a big whiff of dank weed. Think direct injection of ultra-concentrated Resin.

We’re also introducing DDH Hi-Res for network wide release.  This is a Hi-Res with double the dry-hops for a huge blast of juice.  Bring on the atomic bomb!

Sixpoint was created in an 800-square-foot garage in Brooklyn, New York City, in 2004 by award- winning homebrewer-turned-professional Shane Welch. In 2018 Shane passed the torch to Brewmaster Eric Bachli, a former research scientist whose formative craft beer experiences were shaped by Sixpoint beers such as Resin IIPA.

Eric Bachli began his career as a research scientist in the pharmaceutical industry, before following his passion to work in the brewing industry, most recently as the Head Brewer at Trillium Brewing before joining Sixpoint. His career is inextricably tied to the hazy IPA, and Dabble is the next step in that evolution. Dabble, and the Infinite Loop Series, are the latest experiment in Bachli’s career of pushing the scientific boundaries.