No one can deny the beer climate is changing. Global Warmer is a return to beer’s essential ingredients and a purist’s approach to the Winter Beer, a style often dominated by spices and holiday imagery. Sixpoint founder Shane Welch and Sixpoint Braumeister Jan Matysiak collaborated to create the brew and Shane had this to say:

“The first step was to clean the slate and erase all the preconceived notions of what a Winter Ale should be. Then I set up a small capacity brewing lab in my garage and got cracking. Jan did the same on our pilot plant. We engineered this beer based upon a vision I had dancing around in my head. I could smell it, I could taste it, and I could even see it. It was a beer that went “WA-BAM” to your taste buds. Not a sugar plum.”

With a 7% ABV, the brew is rich, malty and complex, in the spirit of a classic Winter Warmer. But the citrus hop character and 70 IBUs of incandescent herbal spiciness shine throughout-a new sort of winter warmer for a changing globe.

Brewmaster Jan Matysiak is happy with the results. “This beer is all about the basic ingredients and no gimmicks. It has no spices added and is not overly sweet. I could say more but the beer speaks for itself.”

“There’s no denying that the beer climate is changing” says Shane Welch. “It’s like we were told that winter beers had to taste a certain way… but if you love good beer this is probably what you’ve really been looking for all along. We are just the conduit that helped make it happen.” 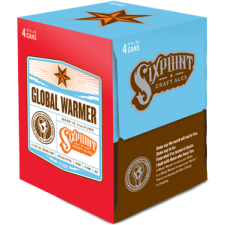 Autumn into Winter is a time a change and of cyclical movement. A sentiment which, at Sixpoint this year, has been especially true. Autumnation changed focus, dropping the pumpkin and spicing to shine a light directly on fresh Mosaic hops. The beer is getting excellent reviews and it’s no surprise- Sixpoint and our fans have long embraced change.

With the introduction of the Global Warmer, we’re winding down the Diesel for this year. It’s certainly a house favorite, however, so don’t assume that it’s gone for good.

On our horizon, a new beer cycle begins, as liquids may now arrive untethered to global positioning. Coming into focus, something distinctly Resinous beckons.