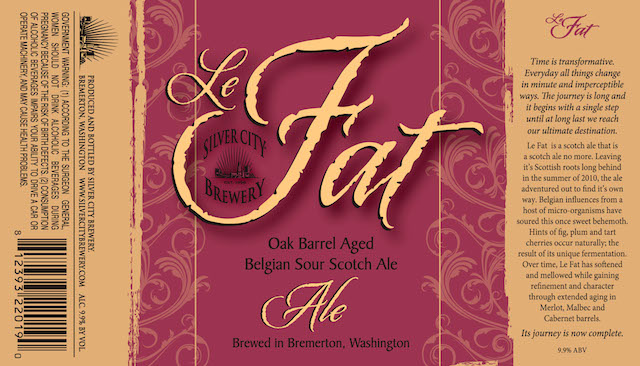 Le Fat 2014 ~ Oak Barrel Age Belgian Sour Scotch Ale will be released in 750ml cork finished bottles on Friday March 7th, 2014. Le Fat production began immediately following the brewery’s move to Bremerton four years ago. The beer is based on one of Silver City’s most popular and award winning beers, Fat Scotch Ale. The beer was fermented with Belgian yeast, inoculated with Lactobacillus, Pediococcus and Brettanomyces and aged in used Merlot, Malbec and Cabernet barrels.  Le Fat 2014 is the 2nd generation of the original batch started in 2010.

Don Spencer, brewmaster for Silver City Brewery, had this to say about this year’s release “Le Fat is quite the labor of love for me and the brew team. There are so many components, steps and time that go into the process of creating Le Fat.” Don added “To see Le Fat in it’s beautiful bottle prepared for presentation after the long development process is personally very exciting. We can’t wait to share this unique creation with our fans!”

Le Fat will go on sale Friday, March 7th at the Silver City Brewery Taproom in Bremerton & Silver City Restaurant in Silverdale. The quantities are limited so please arrive early if you would like to purchase a bottle. The 750ml cork finished bottle will be $19.99. Silver City Taproom will offer a limited amount on draft for tasting starting on March 7th as well.

For Silver City beer fans that can’t make it to Kitsap County for the release, Le Fat will be released a week later on Friday, March 14th at eleven select locations around the Puget Sound. Each location will only receive 1 case each.

The Beer Junction in West Seattle will host the Seattle release party for Silver City Le Fat 2014 on Friday, March 14th starting at 6pm. The award winning original Fat Scotch Ale and the limited release, oak aged Fat Woody will join Le Fat on draft and will also be available for bottle sales to go. Take one or all of these variations home with you to replicate the side by side tasting with friends or to enjoy next to your 6-pack of Ridgetop Red or St. Florian IPA.

For more information on Silver City Restaurant & Brewery, please visit us online at: http://www.silvercitybrewery.com, and on Facebook and Twitter.

Time is transformative. Everyday all things change in minute and imperceptible ways. The journey is long and it begins with a single step until at long last we reach our ultimate destination.

Le Fat, is a scotch ale that is a scotch ale no more. Leaving its Scottish roots long behind in the summer of 2010, the ale adventured out to find its own way. Belgian influences from a host of micro-organisms have soured this once sweet behemoth.  Hints of fig, plum and tart cherries occur naturally; the result of its unique fermentation.

Over time, Le Fat has softened and mellowed while gaining refinement and character through extended aging in Merlot, Malbec and Cabernet barrels.

Its journey is now complete.

For more information on Silver City Restaurant & Brewery, please visit us online at: http://www.silvercitybrewery.com, and on Facebook and Twitter.