(Bellaire, MI) – Short’s Brewing Company announces a collaboration brew with American funk group, Vulfpeck. The beer called “Compression” is an American Sour Ale inspired by the Vulf Compressor, a mixing tool used by the band to give their music its signature sound. Compression will be released at The Short’s Anni Party XII in 550mL bottles. 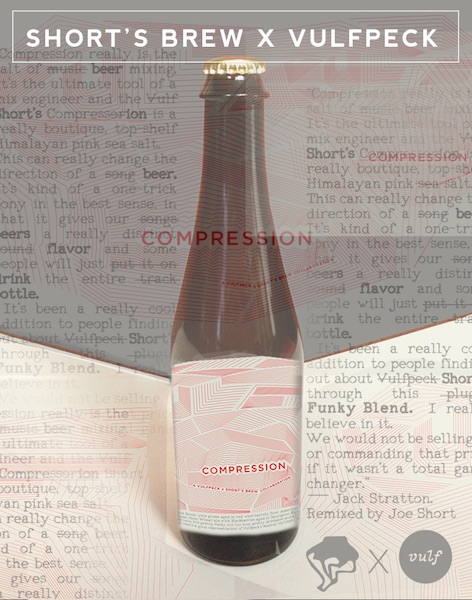 The similarities between the process of mixing or compressing music and blending barrel aged brews are what ultimately led to the collaboration between Vulfpeck and Short’s. In the words of Jack Stratton remixed by Joe Short “Compression really is the salt of music beer mixing. It’s the ultimate tool of a mix engineer and the Vulf Short’s Compressorion is a really boutique, top-shelf Himalayan pink sea salt. This can really change the direction of a song beer. It’s kind of a one-trick pony in the best sense, in that it gives our songs beers a really distinct sound flavor and some people will just put it on drink the entire track bottle. It’s been a really cool addition to people finding out about Vulfpeck Short’s through this plugin funky blend. I really believe in it. We would not be selling it or commanding that price if it wasn’t a total game changer.” — Jack Stratton. Remixed by Joe Short
Compression is a blend of four rare Short’s brews: an Oud Bruin with plums aged in red wine barrels, a Sour American Brown Ale aged in red wine barrels, a Belgian Sour Wheat Ale made with  blackberries aged in Sauvignon Blanc barrels, and a Sour Stout aged in bourbon barrels. Each style of beer corresponds with the band members’ personal tastes. In the words of Theo Katzman, the band desired “a funky sour that kwenchs Katzman’s desire for a mouth-crushing barnyard blanket to the face, WHILST maintaining a sweetness akin to the Stratton-Satisfying Soft Parade, simultaneously capturing a yearning that wets Willia’s whiskey wishes, and yet has an overall drinkability that Dean’s discerning palette can simply not deny.”
Short’s will also release Anniversary Ale in bombers at the party. One of the brewery’s most anticipated annual releases, Anniversary Ale is a high-gravity Wheat Wine brewed with blood oranges, peppercorns, and orange zest.
he Short’s Anni Party XII will take place on Saturday, April 30th, 2016 from 4:00 pm – 10:00 pm. The event will showcase 20 beers and 7 Starcut Ciders on tap, local food vendors, and live music by Vulfpeck, The Go Rounds, and The Crane Wives.