(Elk Rapids, MI) – Short’s Brewing Company is excited to announce their 2018 flagship and seasonal lineup, in addition to their fearlessly creative specialty beers that will be released through the first quarter. 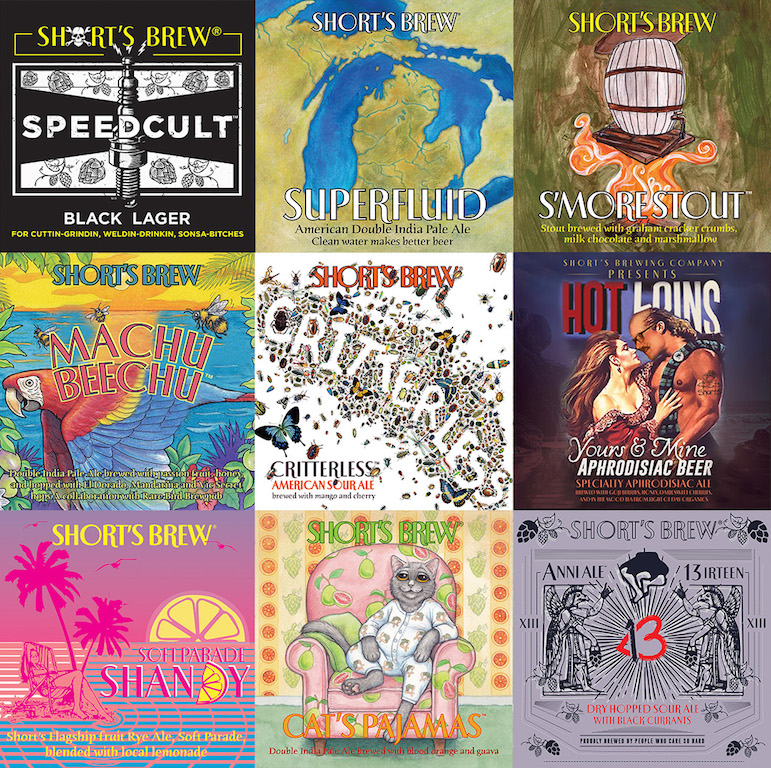 The lineup includes their five flagships beers, Soft Parade, Huma Lupa Licious, Local’s Light, Bellaire Brown, and Space Rock, along with a new expanded seasonal lineup to include two rotating seasonal selections available at any given time in Michigan. Select rotating seasonals will also be available in the greater Short’s distribution area of Illinois, Indiana, Ohio, and Wisconsin. New seasonals will be introduced in this lineup including the fan-favorite former specialty release Superfluid, and 2017’s summer draft hit Soft Parade Shandy.

“We took a hard look at our massively delicious specialty portfolio and dug up some pretty amazing beer to make this lineup extra special. Some of the brands are oldie yet goodies, and others are new innovations. I am personally giddy about this stash!” said Short’s Sales Manager, Pauline Knighton-Preuter.

The remaining specialty releases will be announced throughout 2018 so that Short’s may remain flexible to customer feedback and their brewers’ yet to be determined creative ideas. Stay tuned to the Short’s Facebook Page and the 2018 Release Schedule for all updates.

Located in the heart of Downtown Bellaire, MI, Short’s Brewing Co. was established in 2004 by Joe Short.  In 2009, Short’s began keg and bottle distribution in Michigan via their Elk Rapids Production Facility. Starcut Ciders is a division of Short’s Brewing Company born out of a desire to celebrate the bounty of Michigan orchards. The brewery is known widely for their flagship and experimental brews including Huma Lupa Licious and Soft Parade. Short’s prides themselves on producing fearlessly creative beers, handmade by people who care in Northern Michigan.