(Elk Rapids, MI) – Short’s Brewing Company of Bellaire and Elk Rapids, MI announces distribution of Psychedelic Cat Grass, a triple dry hopped American India Pale Ale. Billed as a “Without Delay IPA,” Short’s plans to package and distribute the beer within 24 hours; allowing customers to enjoy this beer on the same day it was packaged, resulting in out-of-this world freshness. 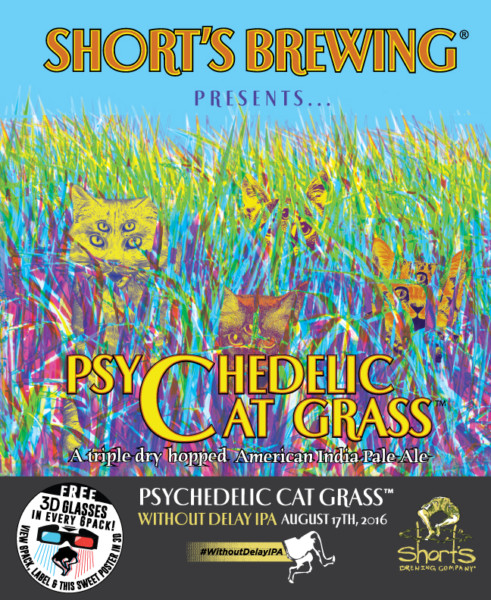 The idea to package and distribute a beer in one day came from Short’s Partner, Scott Newman-Bale. “We originally talked about executing this at our pub only, but in true Short’s fashion we decided to push ourselves further and extend this to the state of Michigan and beyond. Why not go all in and see just how psychedelic we can get?!”

According to Newman-Bale, the company plans to send Psychedelic Cat Grass to any of their current distributors willing to take on the challenge of same day distribution. So far this includes Short’s longtime Michigan distributor, Imperial Beverage. Full distribution information will be posted on Short’s website at a later date. Psychedelic Cat Grass will also be served on tap at Short’s Bellaire pub and for sale in bottles at the pub and Short’s Mart, Short’s Bellaire “brewtique.”

Psychedelic Cat Grass will be distributed in six-packs of 12 oz bottles and a limited number of kegs on August 17th, 2016. The label artwork for this IPA is three dimensional and each six-pack includes its own pair of 3D glasses. An earlier batch of Psychedelic Cat Grass will be served on tap at the Michigan Brewers Guild 2016 Summer Beer Festival in Ypsilanti, MI on July 22nd and 23rd, at Tribes Beer Fest held at Tribes Alehouse in Chicago, IL on July 23rd, and at HopCat locations.