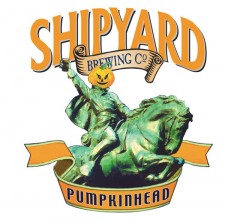 Portland, Maine – To keep up with an unprecedented consumer demand for this fall favorite, Shipyard Brewing Company is extending the season for Shipyard Pumpkinhead Ale through November.

“We usually stop brewing Pumpkinhead around Halloween,” said Master Brewer Alan Pugsley. “This year, we began brewing it a bit earlier and will end after Thanksgiving.”

Based on last year’s growth, the brewery prepared for this year’s production by expanding its brewing capacity to 10,000 additional cases per week.

President Fred Forsley noted that “Even with this expansion and operating the brewery at full capacity since July 1st, distributors are finding it difficult to keep up with the demand for Pumpkinhead. The brew house crew is literally working around the clock to fill the pipeline.”

That pipeline also includes Shipyard’s full line of year-round beers, which sales are on the rise for as well. In the first half of this year, brewery sales grew by 25% over the same period in 2010.

“We’re responding directly to consumer requests,” continued Forsley. “Pumpkinhead pairs well with fall foods and traditional Thanksgiving fare. And, over the years we’ve learned that people stock up on this beer for the winter. Adding an additional month of production gives people extra time to stock up.”

More about the beer: Shipyard Pumpkinhead Ale is a crisp and refreshing wheat ale with delightful aromatics and subtle spiced flavor. This beer was first brewed in August of 2002 at Federal Jack’s Restaurant and Brew Pub in Kennebunk, Maine where Shipyard began. Awards include a 2008 European Beer Star Silver Medal and 1st Place at the 2007 California Brewers Festival.

More about Shipyard: Shipyard Brewing Company is located on the historic waterfront in Portland, Maine and produces 17 varieties of award-winning English style and seasonal beers. Established in 1994, Shipyard has grown to become the 19th largest craft brewery and 28th largest brewery in the U.S.