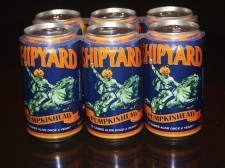 PORTLAND, ME – (September 7, 2012) – Shipyard Brewing Company’s award-winning Pumpkinhead Ale has returned for the season with a new addition to the crop.  For the first time, Pumpkinhead is available in cans.  Pumpkinhead can 6-packs will hit the shelves in CT, FL, MA, ME, NH, RI, and VT next week with other select markets to follow.

Pumpkinhead Ale is also available nationwide in bottles and on draft.  Consumers can check for availability on a state-by-state basis through Shipyard’s Beer Finder:     http://www.shipyard.com/features/beerfinderindex.shtml.

Earlier this summer, Shipyard released its flagship Export Ale in cans.  More information can be found at this link.  http://shipyardbrewing.blogspot.com/2012/07/shipyard-brewing-introduces-export-ale.html

Both Pumpkinhead and Shipyard Export Ale can 6-packs have a suggested retail price of $7.99 – $8.99.  These products will also be available soon in can 12-packs.

In 2008, Shipyard Pumpkinhead Ale took home a silver award at the European Beer Star competition in Nuremberg, Germany.  In 2007, this beer took first place in the Specialty Beer category at the California Brewers Festival.

About Shipyard Brewing Company:  Founded in 1994, Shipyard Brewing Company is located on the historic waterfront in Portland, Maine and produces 17 varieties of award-winning English style and seasonal beers.  Its products are distributed in over 35 states.  The Brewers Association ranks Shipyard as the 16th largest craft brewery in the U.S. and 24th overall, making it one of the top 15 rising breweries in the country.  In 2011, the brewery produced 129,285 barrels (1,781,260 cases) of its award-winning brews.  This marks a 31.7% increase over 2010.