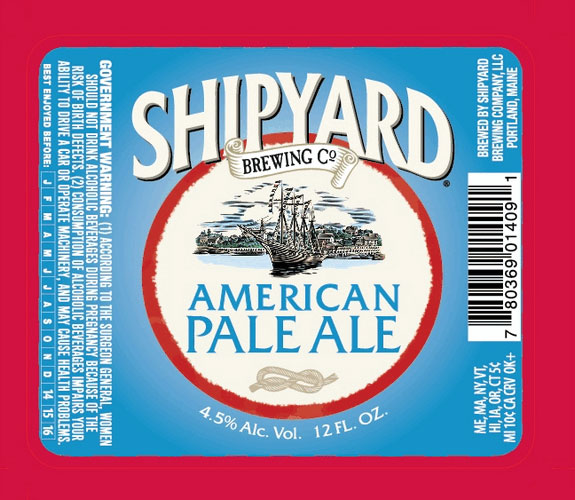 Now, in 2014, Shipyard American Pale Ale is available in the US on draft and in bottles from sea to shining sea.   Learn more about this beer from Shipyard’s VP of Sales and Marketing, Bruce Forsley:  http://www.youtube.com/watch?v=S3bF6gv8jJ4

Why Marston’s?  Marston’s owns Ringwood Brewery where Shipyard’s Master Brewer Alan Pugsley first learned to brew.  American Pale Ale is the next stage of a partnership established between Ringwood and Shipyard to distribute Old Thumper in the US nearly 20 years ago.

Why the UK before the US?  The seed for American Pale Ale began to sprout on July 4, 2012 when Master Brewer Alan Pugsley travelled to England to celebrate American Independence Day with Marston’s by brewing a collaborative beer called Independence Pale Ale.  That celebratory beer quickly sold out and, based on customer demand for this American-style beer, American Pale Ale grew into the new interpretation of that first independence brew.

About Shipyard Brewing Company:  Founded in 1994, Shipyard Brewing Company is located on the historic waterfront in Portland, Maine and produces 17 varieties of award-winning English style and seasonal beers.  Its products are distributed in over 40 states.  The Brewers Association ranks Shipyard as the 15th largest craft brewery in the U.S. and 23rd overall.  In 2013, the brewery produced 166,060 barrels (2,288,300 cases) of its award-winning brews.