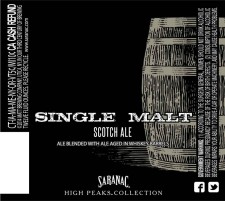 Utica, N.Y. — The F.X. Matt Brewing Co., brewer of Saranac, is introducing a special, limited edition brew, Saranac Single Malt-a strong scotch ale. This “one off” beer was specifically designed as part of the Saranac High Peaks Series, which is the brewery’s exclusive extension of the Saranac line.

The Saranac Brewery High Peak Series is a series of special beers, limited to one single batch. These beers are much bigger, more complex, and targeted to craft beer aficionados.

Saranac Single Malt is a single-malt, high gravity scotch ale aged in whiskey barrels that were brought over from the Tomintoul distillery in Scotland. It is a rich, malty and sweet beer with an underlying scotch-like aroma to balance the malty notes. There is a noticeable whiskey note in the aroma and finish.

This special beer started aging in barrels during the company’s 125th anniversary last year. The barrels used are over 100 years old and have been used most recently to age Tomintoul’s award winning scotch whiskey, and had been previously used to age sherry.

“In our mind, the barrels are 125 years old!,” said Fred Matt, president and 3rd generation. “In all seriousness though, they are very close to that. Imagine how much character is in this beer between our brewing history and the history of these barrels. We’ll say 125 years worth of character.”

Saranac Single Malt pairs well with grilled meats, roasted duck, and aged cheddar cheese. It has 35 IBUs and 9.0% ABV and will be available in 4 packs and on draught in very limited quantities while supplies last.