(Chandler, AZ) –Houston, we’ve solved a problem! A size problem, that is. For the first time ever, SanTan Brewing Company will offer HUGE 24 oz cans of its wildly popular MoonJuice Galactic IPA and MoonJuice Galactic Grapefruit IPA in year round, wide release. 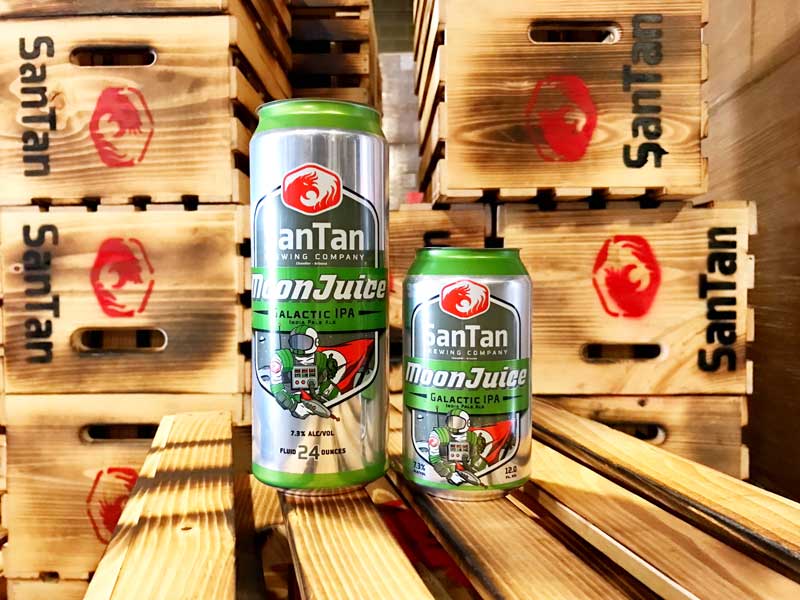 In order to accommodate a larger can, SanTan founder, Anthony Canecchia and plant engineer, Fred Marshall had to re-engineer their original cask canning line including machining new parts and reprogramming the operating system.

“Tinkering with machines is something we love to do at SanTan.  We are never content with what we are given and are always looking to improve our game. I am extremely proud and excited to be the first Arizona craft brewer to package in a 24 oz can,” said Anthony Canecchia, founder and brewmaster, SanTan Brewing Company.

Expanding its offerings to include the 24 oz can has been a goal at SanTan for years. The larger, single serve package will increase availability of SanTan Brewing craft beer in convenience stores and sports venues.

Canecchia selected his two versions of MoonJuice IPA as the first brews to fill the 24 oz cans primarily due to their huge success and growth within the first year of wide spread availability in 12 oz cans. The price point will remain consistent with the current six-pack pricing per volume, coming in around $2.99-$3.99 per can.

MoonJuice Galactic IPA is an out-of-this-world IPA crafted with tons of Galaxy and Nelson-Sauvin hops that transcends all Earthly pleasures, emitting an aroma of peach, apricot and tropical fruit, MoonJuice Galactic IPA will quench even a universal sized thirst. The grapefruit variation, is made with an added splash of Arizona grown grapefruit juice, courtesy of Sun Orchard in Tempe.

The new 24 oz cans will be available across Arizona at many Circle K, BevMo, Total Wine and Sprouts locations as well as select independent retail outlets. To find a pint or a 24 oz can of SanTan’s beers near you, visit SanTan Brewing Company’s Beer Finder online at www.SanTanBeerFinder.com.

In 2009, SanTan Brewing began distributing their Southwestern Style Ales throughout the state of Arizona, operating with a mission to pair craft beer with craft food that would inspire great conversation and good times. 2014 marked the beginning of taking this journey throughout the Southwest and California. Today, SanTan distributes in Arizona, California, New Mexico and Texas.

SanTan beers have won numerous national and statewide awards including a silver award at the World Beer Cup in 2016, two medals at the US Open Beer Championship: bronze in 2013 and gold in 2011. SanTan Brewing also took home a silver medal at the 2011 Great American Beer Festival.