(Newport, OR) — The most Oregon of all Rogue Farms beers, Marionberry Sour, hits shelves for the first time this July. Marionberry Sour is a vibrant violet-hued sour ale made with prickless marionberries that bring a taste of the Willamette Valley with every sip.

“We made Marionberry Sour this year because it celebrates the delicious berry we love so much,” says Rogue Brewmaster John Maier. “I’m constantly inspired to brew new beers based on the crops we grow at the farm. They come to the brewery at peak ripeness and I always know exactly how the crops were treated when I get them. That quality matters.”

Originally developed by Oregon State University researchers in 1956, just miles from Rogue Farms in Independence, Oregon, marionberries are a bigger, juicier and more flavorful variety of blackberry. Marionberry Sour is made with a prickless variety grown on Rogue Farms that is easier to hand-pick for brewing. 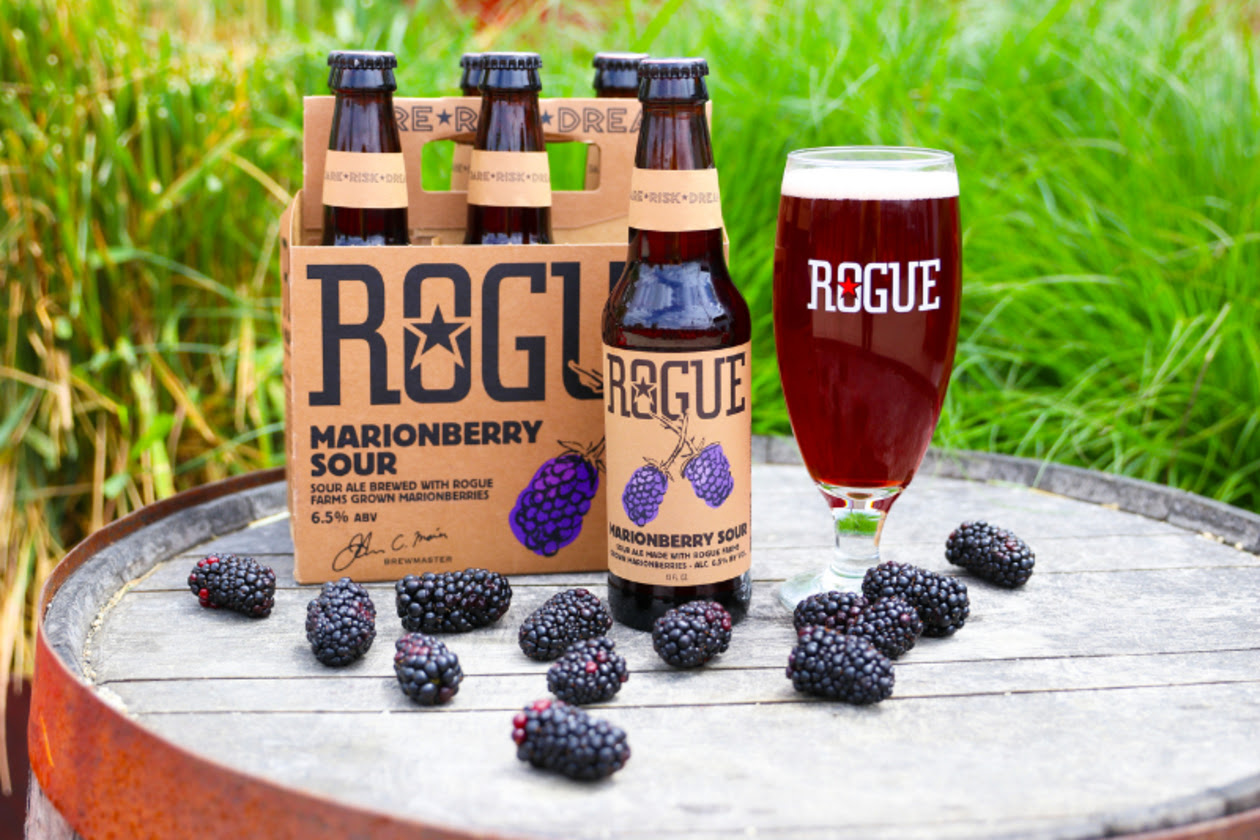 “We grow our own ingredients because it gives us an unlimited well of inspiration and innovation,” says Rogue President Brett Joyce. “If we add a new crop that is delicious and tastes great in a beer, we’ll increase the acreage and brew more beer with it. We’re all a part of the relentless innovation here at Rogue, but the farm is our greatest inspiration.”

Use the Rogue Finder to find Marionberry Sour and other Rogue Farms beers near you. For the full farm experience, beer lovers can have a pint at Chatoe Rogue, a Rogue tasting room located on the farm. Guests can see the hops, fruits, vegetables and botanicals grown by Rogue farmers before they’re used in beers.

Marionberry Sour is available on draft now at all Rogue pubs and will be available in 6-pack 12 ounce bottles in July. For samples, photography and more information, contact Rachel Morrison. Check out the 2018 Rogue Farms Crop Report for a full update on what’s growing.

Rogue Ales & Spirits, the only farmer-brewer-distiller-cooper in the United States, was founded in Oregon in 1988 as one of America’s first microbreweries. Rogue has won more than 1,900 awards for taste, quality and packaging, and is available in all 50 states as well as 54 countries. Proudly rooted in Oregon soil, Rogue’s beers, spirits and sodas are made with ingredients grown on Rogue Farms in the Tygh Valley and in Independence, Oregon. Rogue Spirits are hand-distilled on a 550-gallon still in Newport, Oregon, aged in the thick ocean air of the Yaquina Bay and bottled by hand. Since 2008, Rogue has remained committed to sharing the terroir of Oregon hops, barley, rye, wheat, honey, cucumbers and pumpkins one acre at a time by growing its own.