(NEWPORT, OREGON) – Ditch the tie this Father’s Day and give dad something he really wants: Dad’s Little Helper Black IPA, the beer for Father’s Day. 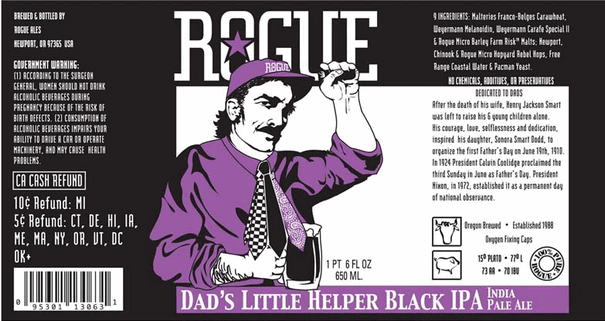 Dad’s begins in the dirt, and Dad’s Little Helper is made with Rogue Farms’ proprietary palate of fresh ingredients, including Liberty & Freedom Hops and Dare & Risk Malts that are grown and harvested on Rogue Farms in Independence and Tygh Valley, Oregon. Dad deserves only the best, and when you grow it from ground to glass you can taste the difference.

Dad’s Little Helper Black IPA – made specifically for Father’s Day – is back on taps and shelves May 1st, 2014 on draft and in 22oz. serigraphed bottles.

Rogue is a revolution that expresses itself through world class artisan ales, lagers, stouts, porters, meads and spirits. From ground to glass, Rogue has remained committed to saving the terroir of Oregon hops and barley, one acre at a time, by growing their own.