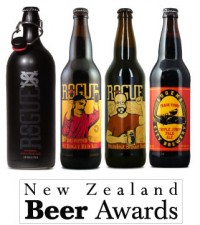 NEWPORT, OR., July 16, 2008 – Rogue Ales Brewery and Eugene City Brewery won 4 of the 11 Best in Class awards and the title of Supreme Champion for Rogue’s Imperial India Pale Ale at the New Zealand International Beer Competition.

The New Zealand International Beer Awards is an annual competition held each year in Nelson, New Zealand. Medals awarded are determined on fidelity to style, brewing excellence, and overall product quality. Each beer is judged in a blind tasting fashion by a panel of international beer experts.

Celebrating its second century, Rogue Ales is an Artisan Varietal Brewery founded in Oregon in 1988, as one of America’s first 50 microbreweries. Rogue has 550+ awards for taste and quality and is available nationally and in 10 countries.

Eugene City Brewery is an Artisan Varietal Brewery founded in Oregon in 2004. Track Town Ales have 30 awards for taste and quality and is distributed in 14 states.