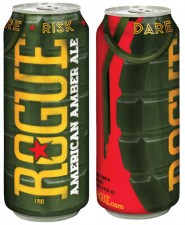 This beer is about America, not about a beer style – and at Rogue we build relationships, not just ales. For years we’ve taken an active role in supporting the men and women of our Armed Forces, and American Amber Ale has been our Patriotic Rogue since we first opened our doors 25 years ago. Of course, having a great beer style doesn’t hurt. Since its creation, American Amber has won 6 gold medals at the World Beer Championships.

Rogue Brewmaster John Maier pays tribute to America’s Amber Waves of Grain by brewing American Amber with hops and barley from Rogue Farms in Independence and Tygh Valley, OR . Using Rogue grown ingredients gives American Amber a unique taste of place that can only be grown in the USA.

These versatile grenade cans give you the freedom to celebrate America from Sea to Shining Sea – our 16oz cans offer maximum portability and are ideal for enjoying at home or in the great outdoors.

Celebrating its second century, Rogue Ales is an Artisan Varietal Brewery founded in Oregon in 1988, as one of America’s first 50 microbreweries. Rogue has 1,000+ awards for taste and quality and is distributed nationally, in 41 countries and in Army Air Force stores throughout the US and the world.