(Newport, OR) — Rogue Ales & Spirits is made by, and for, the curious and the award-winning Rolling Thunder family of products is a testament to that inquisitive spirit. As the only farmer-brewer-distiller-cooper in the world, Rogue is able to handcraft these products at their headquarters in Newport, Oregon. Rolling Thunder Imperial Stout and Rolling Thunder Stouted Whiskey are the culmination of all things DIY from Rogue. 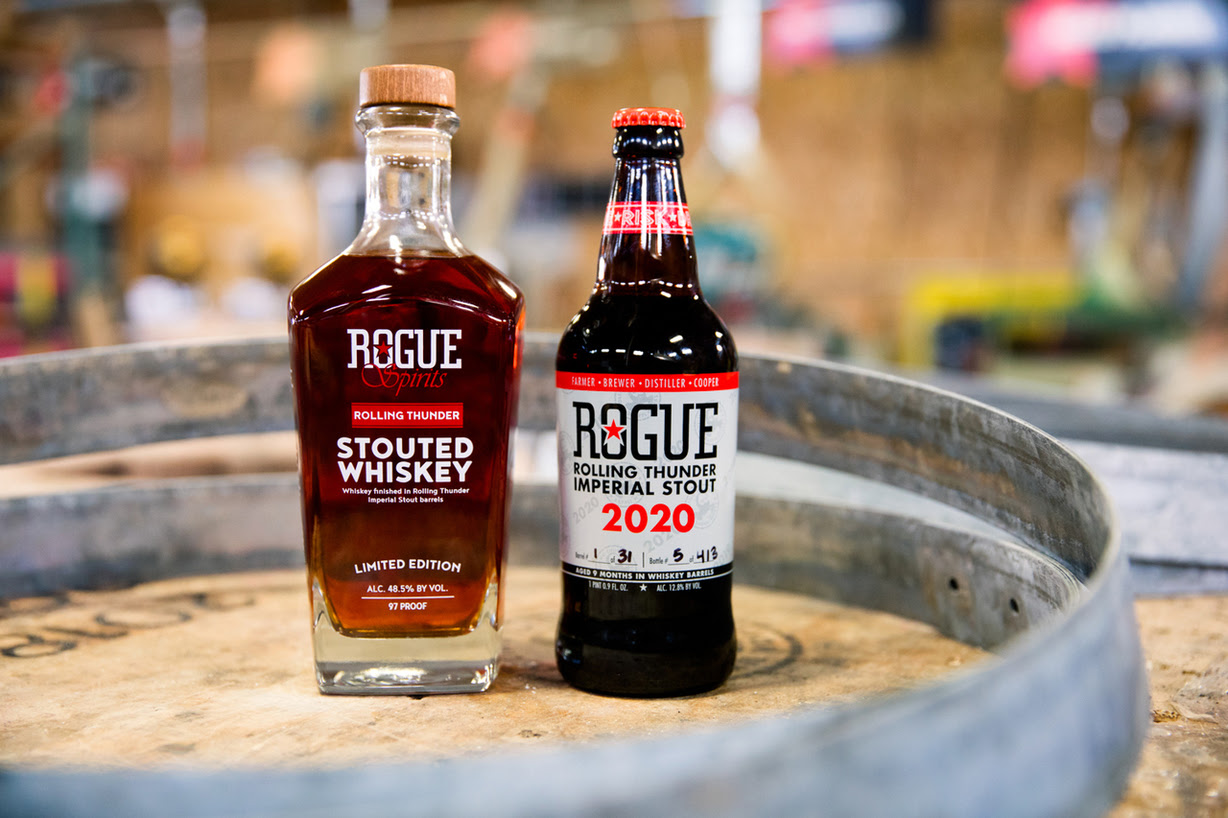 “With our culture of relentless curiosity comes the desire to create, innovate and do things differently,” says Bliss Dake, Vice President of Marketing. “At Rogue we come up with some wild ideas and then we make them happen. We are makers with a ‘Do It Yourself’ attitude and are always asking ‘What If?’. This ‘What If’ mentality pushed us to experiment and ultimately create something special with the Rolling Thunder family.”

One of the reasons the Rolling Thunder family is so special is because of the handmade barrels built at Rogue’s own Rolling Thunder Barrel Works. In 2015, Rogue acquired vintage French WWII-era coopering equipment and built a barreling facility. Longtime employee Nate Linquist was tapped to be Rogue’s first cooper and spent six months apprenticing, learning the ancient art of barrel making. Using Oregon Oak, Nate assembles, raises, toasts, chars, hoops, heads, hoops again, cauterizes, sands and brands each barrel, one at a time, all by hand.

Rogue Ales & Spirits, the only farmer-brewer-distiller-cooper in the United States, was founded in Oregon in 1988 as one of America’s first microbreweries. Rogue has won more than 2,000 awards for taste, quality and packaging, and is available in all 50 states as well as 54 countries. Proudly rooted in Oregon soil, Rogue’s beers, spirits and sodas are made with ingredients grown on Rogue Farms in Independence, Oregon. Rogue Spirits are hand-distilled on a 550-gallon still in Newport, Oregon, aged in the thick ocean air of the Yaquina Bay and bottled by hand. Since 2008, Rogue has remained committed to sharing the terroir of Oregon hops, honey, cucumbers and pumpkins one acre at a time by growing its own.