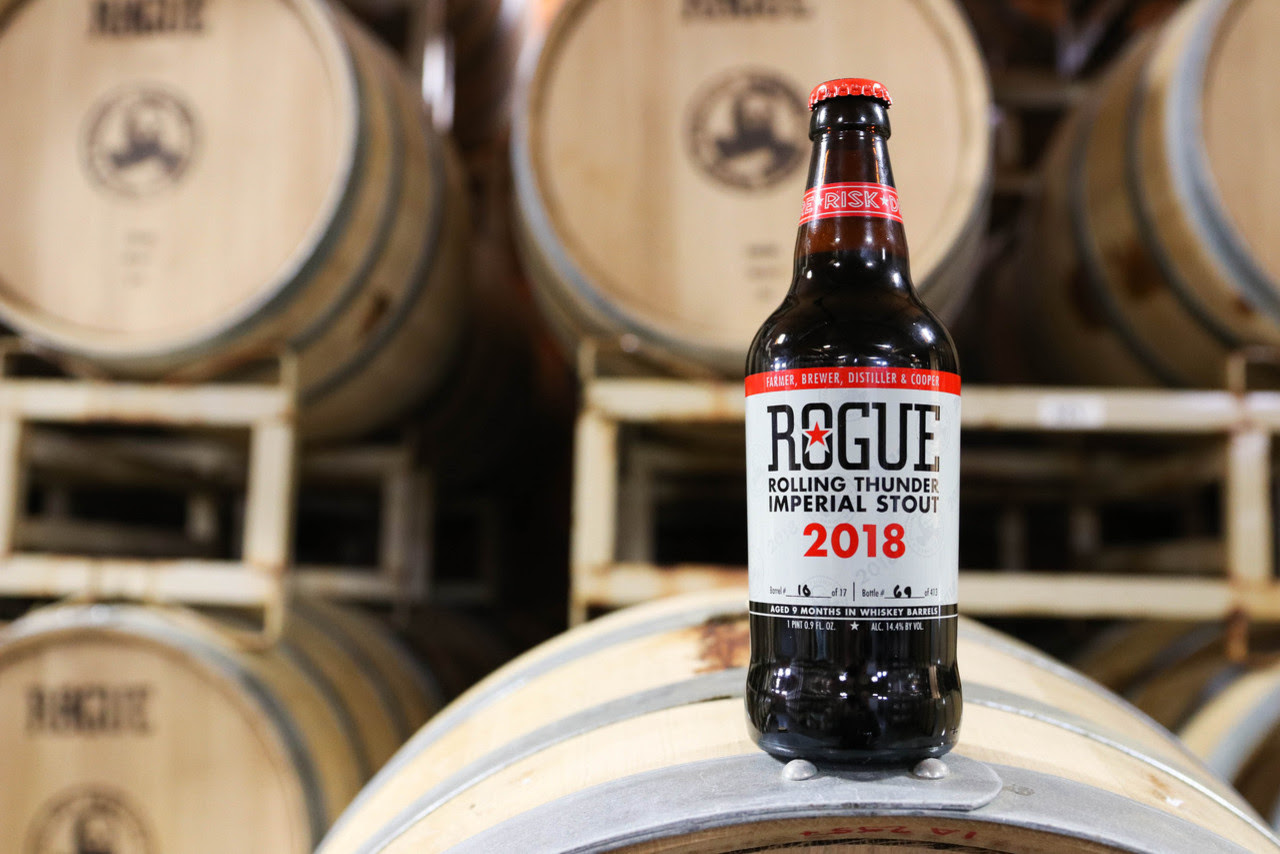 From growing the ingredients to brew beer, to making its own barrels, to hand-bottling all beers and spirits, Rogue’s DIY philosophy extends into everything it does, including numbering every bottle of the limited edition Rolling Thunder by hand.

Inspired by Oregon’s bounty and the love of a good creative challenge, Rogue brewers annually change some of the ingredients in Rolling Thunder. “We chose raspberries for 2018 because it seemed like a natural, Willamette Valley-driven progression from last year’s cherries. They add a whole new dimension to the beer through a slight hint of tartness, followed by a deep dark fruit flavor,” said Rogue Innovation Brewer Michael King. “This marries perfectly with the dark roasted malt flavors and vanilla characteristics highlighted from the aging in Oregon Oak.”

This year’s version pours black with a creamy head and features deep sherry notes accentuated by hints of raspberries, brown sugar and vanilla, held up against a dark roasted malt backbone with earthy hops.

Rolling Thunder Imperial Stout is available nationally in limited quantities on draft and in hand-numbered, 500 ml (16.9 ounce) bottles. Use the Rogue Finder to find it near you.

From Barrel
In 2015, Rogue acquired vintage French WWII-era coopering equipment and built Rolling Thunder Barrel Works. Longtime employee Nate Linquist was tapped to be Rogue’s first cooper and spent a year and a half apprenticing, learning the ancient art of barrel making.

Using Oregon Oak, Nate assembles, raises, toasts, chars, hoops, heads, hoops again, cauterizes, sands and brands each one barrel, one at a time, all by hand. At full capacity, he makes one barrel a day.

To Distillery
The barrels are soaked first with Dead Guy Whiskey, which is distilled from Dead Guy Ale. During the aging process, the Dead Guy Whiskey imparts its flavor into the oak, getting the barrels ready for the next step.

To Brewery
Eight different types of grains, including oats and Rogue Farms barley, are brewed with Rogue Farms hops, brown sugar, raspberries, vanilla and chocolate to create a bold character that is perfect for aging. The Rolling Thunder barrels that once held Dead Guy Whiskey are filled with Rolling Thunder Imperial Stout and aged in the rich, salty air of the Yaquina Bay on the Oregon coast. After nine months in the barrels, the beer is ready for the final step.

To Bottle
As the final stop from barrel to bottle, the imperial stout is poured into 500 ml bottles. Rolling Thunder Imperial Stout can be enjoyed immediately or can be cellared for years to come.

Rogue Ales & Spirits
Rogue Ales & Spirits is an agri-fermenter founded in Oregon in 1988 as one of America’s first microbreweries. Rogue has won more than 1,900 awards for taste, quality and packaging and is available in all 50 states as well as 54 countries. Since 2008, Rogue has remained committed to saving the terroir of Oregon hops, barley, rye, wheat, honey, jalapeños, and pumpkins one acre at a time by growing its own.