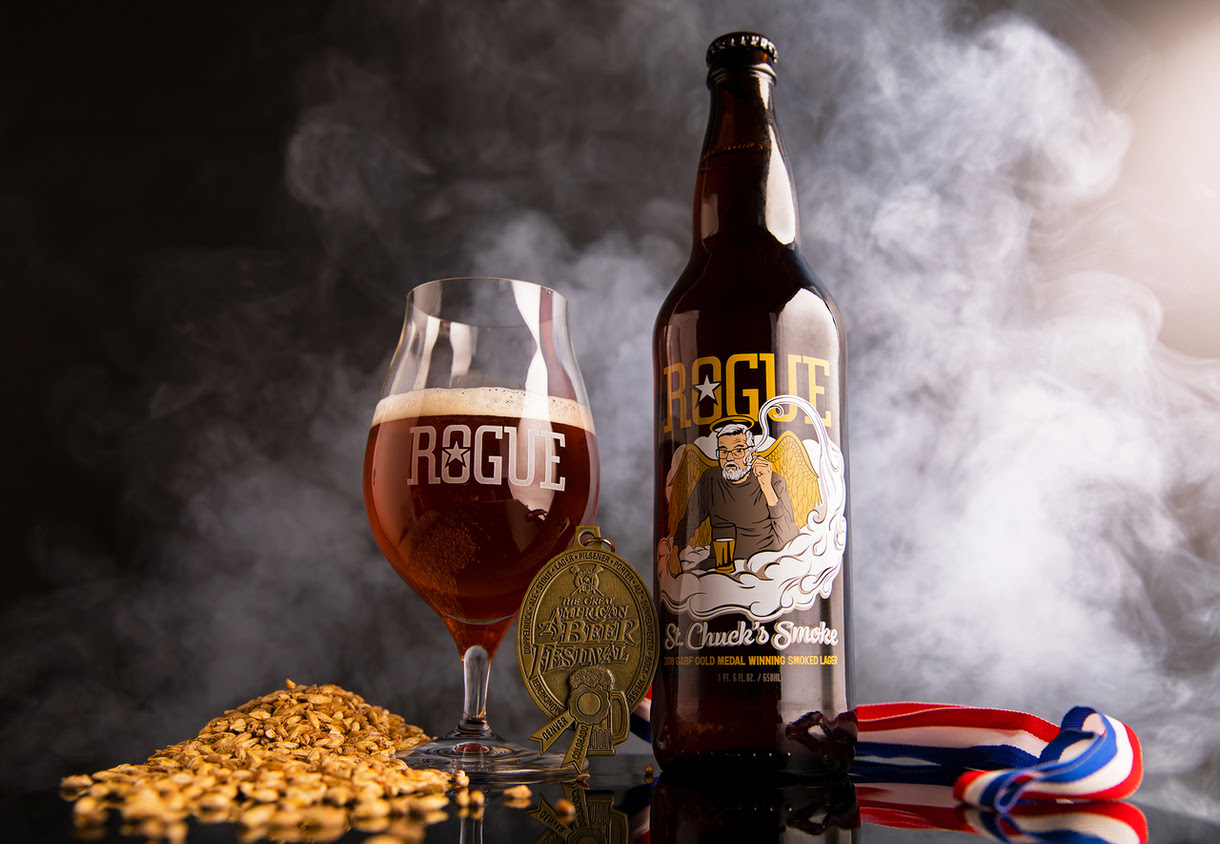 Chuck’s Smoke delivers a traditional beer style experience with a Rogue twist: some of the malts in the beer are smoked by hand in Newport by Nate Linquist, Rogue’s cooper. The resulting beer is rich with notes of caramel and a lingering smoke finish.

“Smoked beers originated in Germany as Rauchbier (rauch = smoke, bier = beer), but in the United States, smoked beers have become synonymous with creativity and experimentation, two of our favorite things,” says Rogue President Dharma Tamm. “We’re proud that it’s often our most experimental beers that win awards, and we’re excited to share this beer with our fans and fellow Rogues.”

St. Chuck’s Smoke is named after Nate Linquist’s dad, Chuck Linquist. “Chuck was the second employee Rogue ever hired, 30 years ago,” says Rogue Brewmaster John Maier. “His legacy lives on through Nate, some not-fit-for-print stories and now this beer named and designed after him.”

Over the last 30 years, Rogue has won over 2,000 awards. This year’s gold is the 10th GABF gold Rogue has won, the 10th medal from GABF’s smoke category, and the 30th GABF medal overall.

St. Chuck’s Smoke is available in 22 ounce bottles in extremely limited quantities (36 cases total) at all Rogue pubs now. Find it at the Rogue Pub near you.

Rogue Ales & Spirits, the only farmer-brewer-distiller-cooper in the United States, was founded in Oregon in 1988 as one of America’s first microbreweries. Rogue has won more than 2,000 awards for taste, quality and packaging, and is available in all 50 states as well as 54 countries. Proudly rooted in Oregon soil, Rogue’s beers, spirits and sodas are made with ingredients grown on Rogue Farms in Independence, Oregon. Rogue Spirits are hand-distilled on a 550-gallon still in Newport, Oregon, aged in the thick ocean air of the Yaquina Bay and bottled by hand. Since 2008, Rogue has shared the terroir of Oregon by growing its own hops, barley, rye, wheat, honey, cucumbers and pumpkins and using them in beers.