(Newport, OR) — This summer, Rogue Ales & Spirits releases Combat Wombat, a collision of styles and flavors, bursting with intensity and personality. The fierce combination of a Northeast-style hazy IPA brewed with Australian hops and a sour ale with blood orange and grapefruit inspired both Combat Wombat’s name and its striking label design. 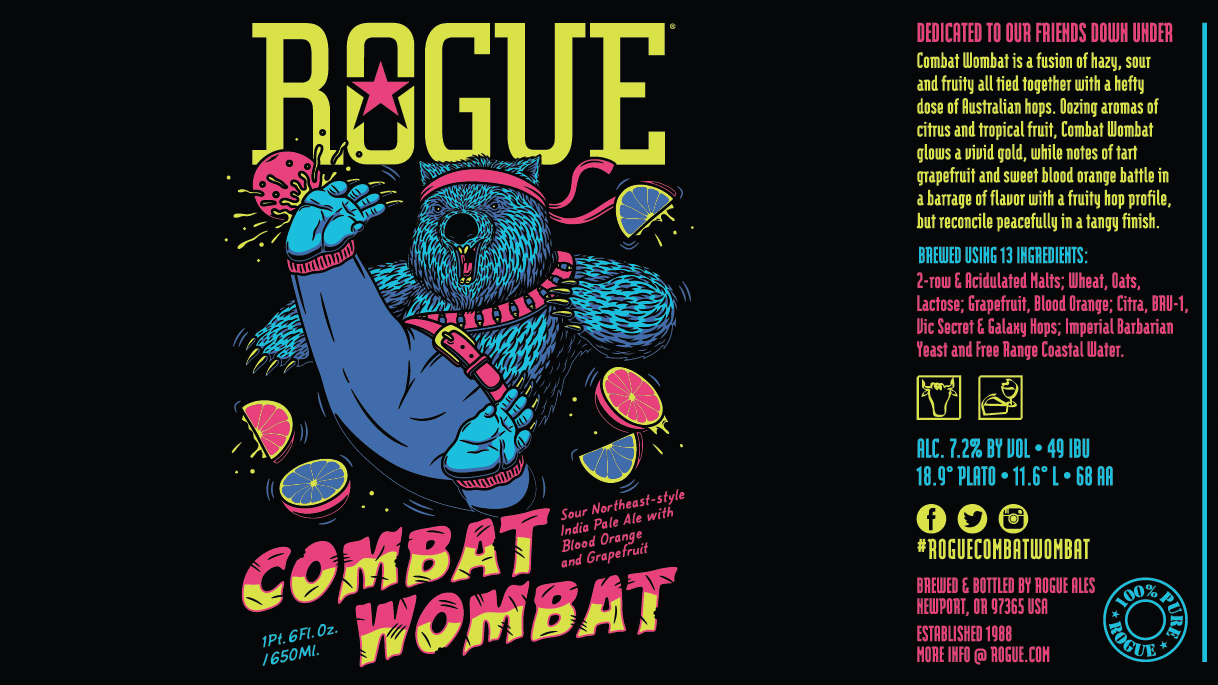 Given only the name and a pint of Combat Wombat, Rogue Graphic Designer Evan Bartholomew got to work drawing and designing Rogue’s newest creation.

“I love the idea of this tiny, aggressive, but lovable marsupial that’s ready to battle and brew at the same time,” says Rogue Graphic Designer Evan Bartholomew. “The beer is citrus-forward but sweet, sour but juicy, and I think the label mirrors those contradictions. I wanted the bright neon colors on the label to reflect the big flavors of the beer.”

“With thousands of beer options on shelves, and more joining them every day, label art is often a deciding factor for many consumers,” says Rogue President Brett Joyce. “Evan’s illustrations have set Rogue apart on the shelf since our Voodoo collisions and are part of the tradition of unique art on Rogue ales and spirits.”

Combat Wombat is available in 22 ounce bottles and on draft in all Rogue pubs through October. Use the Rogue Finder to find it near you.


Rogue Ales & Spirits, the only farmer-brewer-distiller-cooper in the United States, was founded in Oregon in 1988 as one of America’s first microbreweries. Rogue has won more than 1,900 awards for taste, quality and packaging, and is available in all 50 states as well as 54 countries. Proudly rooted in Oregon soil, Rogue’s beers, spirits and sodas are made with ingredients grown on Rogue Farms in the Tygh Valley and in Independence, Oregon. Rogue Spirits are hand-distilled on a 550-gallon still in Newport, Oregon, aged in the thick ocean air of the Yaquina Bay and bottled by hand. Since 2008, Rogue has remained committed to sharing the terroir of Oregon hops, barley, rye, wheat, honey, cucumbers and pumpkins one acre at a time by growing its own.