(Cincinnati, OH) – Experimentation runs deep in our ethos here at Rhinegeist. Each day we strive to make the best beer we can, focused on quality & consistency. That said, the creative act of coming up with new recipes and experimenting to see how different techniques and ingredients represent themselves in the final beer is one of the most compelling things we do. There is a degree of alchemy – yeast does its work behind stainless steel walls – and raw ingredients simply do not taste exactly like the final product, so we must brew with them to find out how certain ingredients will express themselves. 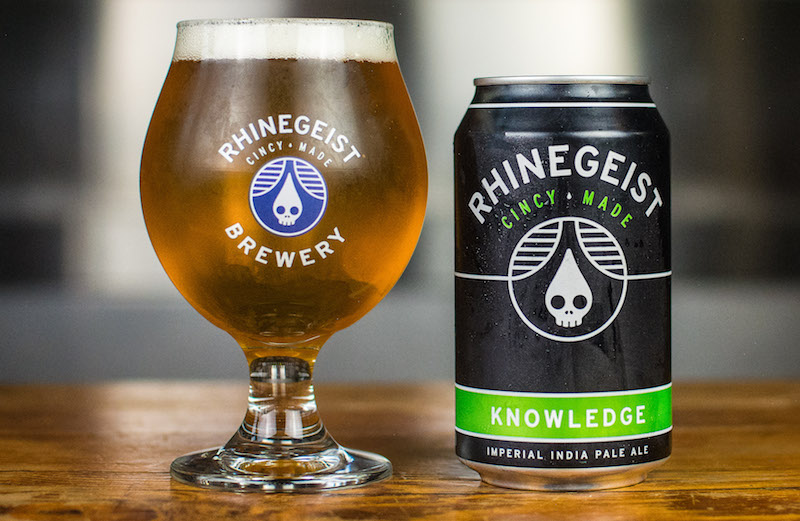 One of the beer styles we enjoy most is IPA – the complex flavors and aroma hops imbue to our beer proves a constant siren for us in the brewhouse. Each harvest (mid to late September) since opening, we’ve traveled out to Yakima, Washington, to select the lots of hops that will ultimately end up in our beer. Yakima is an incredible agricultural town a few hours Southwest of Seattle, over the Snoqualmie Pass, an arid desert plateau fed by glacial waters, and a terroir which produces honey, apples, melons, grapes, corn, potatoes and our glorious hops (40,000+ acres).

In Yakima each year, we meet with hop suppliers, farmers and watch the vines harvested down off the trellises, knocked off the bines, baled, dried, and finally pelletized. We rub and sniff each lot of each variety that will ultimately make it into our beer and it’s with these selected hops that we can predictably brew the same beer.

The Experimental Double IPA Series we began brewing this past year was a brewed essay on the expression of hops. We played with hops we had never brewed with before, in combinations we had not yet explored, and pushed in different directions with yeast and dry hopping treatments. We learned a few things along the way – namely that we love to experiment and we want to keep this project rolling – but also that we specifically enjoyed one version (Exp. DIPA #004) that we felt was distinct enough from the rest of our portfolio to warrant life as a year round brand. This beer is Knowledge.

Knowledge is an intensely hoppy Imperial IPA that expresses the deep pine and citrus tones that put American hops on the map. Columbus, Chinook, Simcoe & Centennial play a melody that fires on all pine & citrus cylinders. It’s in these experimental “aha” moments where we hear the secret music.

The hops combined in Knowledge each play an important role:
• Columbus is a high oil content hop with aggressive tones of black pepper and licorice.

• Centennial is one of the most citrus forward hops grown. When we select Centennial, we look for
its bright and pungent lime zest character.

• Chinook is known for grapefruit notes & spice. It’s like biting into the rind of a grapefruit: refreshing, brisk, yet with some nice ruby red notes. We select this specifically from Champoux Farms in Yakima – their Chinook favors more ruby red character than pith.

• Simcoe – passionfruit, berry, dank, earthiness. The bass tones of Simcoe are deep and satisfying
and provide a dank structure to the beer.

The act of experimentation is the lightning that runs through our pipes at the brewery. We’ve got new hops coming in from experimental fields in Yakima (ones without names) and there are endless yeast angles to play. And every now and again, there’s a great beer out there lurking behind the next experiment.

We hope you enjoy Knowledge as much as we do – the freshest entrant into the hoppy branch of our beer family tree. We’re thrilled with its bright and potent zing and hope you enjoy furthering your hop IQ with each sip. Study up, fellow students of life.