(SEATTLE, WA)  – Blimey, it’s back! Reuben’s Brews’ popular Blimey That’s Bitter! Triple IPA is returning for its annual release, February 6, 2016 at noon at a release party at the Reuben’s Brews Taproom in Ballard. This much-anticipated beer won Best Imperial IPA in the Pacific Northwest at the 2014 US Beer Tasting Championships. 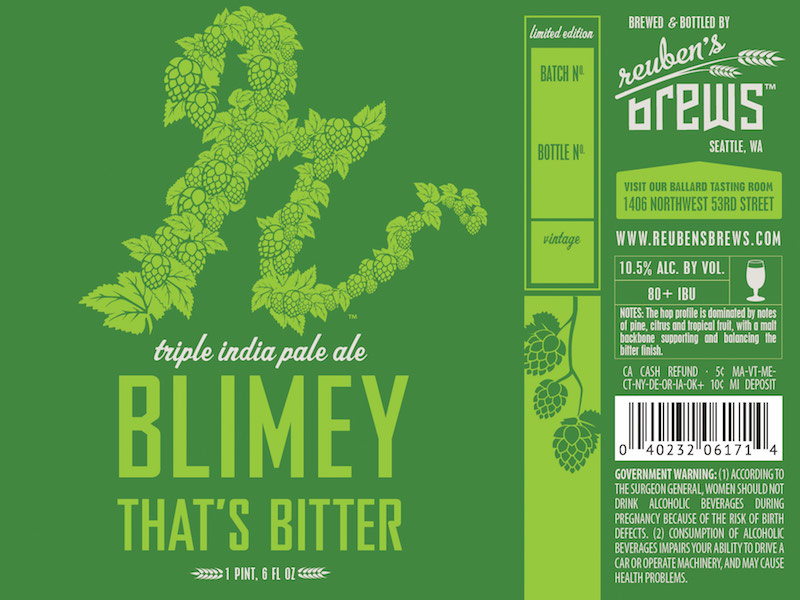 Originally created for the inaugural Washington Hop Mob event back in 2014, Blimey is packed with Simcoe, Amarillo and Citra hops. It promises an intense citrus, pine and tropical aroma followed by a smooth, medium-full mouth feel. This brew has become a favorite for IPA drinkers – and it’s a big one. Blimey comes in at 10.5 percent ABV and 80 IBUs. Being the hop heads Reuben’s are, they wanted to increase the nose over prior years so they doubled the third, and last, dry hop over prior years. This brew now comes in at almost 7lbs of hops per barrel!

Blimey will be available on tap and in bottles. There will be a limited number of Blimey t-shirts also available, unique randals and other versions of the brewery’s hoppiest brew.

During the Blimey release, Reuben’s Brews will also have a small amount of Gobsmacked bottles available. The brewery first brewed Gobsmacked in March 2015 for Brouwer’s Cafe’s 10th anniversary. This hefty brew exudes peach notes in the nose, with cane sugar sweetness in support. Tangerine comes through in the mid-palette, with grapefruit in the finish. A smooth, soft and juicy body provides balance in the finish. Gobsmacked clocks in at 10.0% ABV and 80 IBUs. And finally, on February 6 there should be some Imperial IPA and Hat-trick Triple IPA on tap to complete the hoppy line-up!

About Reuben’s Brews
Reuben’s Brews is a small, family-owned brewery located in the Ballard neighborhood of Seattle, WA. Since opening in 2012, Reuben’s has won Gold and Bronze medals at the 2015 Great American Beer Festival, 30 World Beer Championships medals and was named Mid-Sized Brewery of the Year at the 2015 Washington Beer Awards. Its expanded taproom and production brewery opened in May 2015. For more information, visit www.reubensbrews.com or follow on Facebook and Twitter.