(Seattle, WA) – Just weeks ahead of the kick-off of the 2014 MLS regular season, Redhook Brewery announced today the release of ECS No Equal Blonde. The American blonde ale is the second beer brewed by Redhook Brewery in collaboration with the Emerald City Supporters, the largest supporters’ group for Seattle Sounders FC. 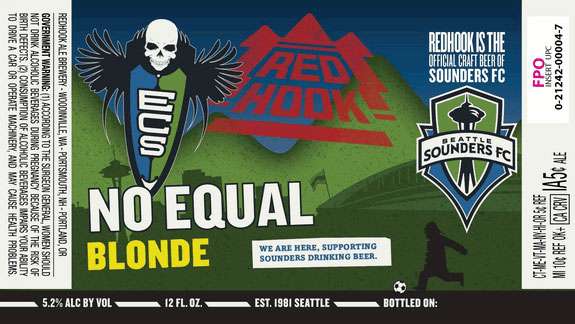 ECS No Equal Blonde is available on draught and in six- and 12-packs of 12-ounce bottles in Washington State, with limited distribution in bordering Oregon and Idaho.

Redhook’s original collaboration with the Emerald City Supporters, ECS No Equal Amber Lager, was launched in March 2012 and proved a huge hit with supporters of the club. Both crushable beers with lower ABV, ECS No Equal Blonde is distinguished by Cascade and Willamette hops and malted wheat for a clean, crisp and refreshing finish.

“To brew another great beer with the Emerald City Supporters, we knew it needed to quench the thirst of Sounders fans for the full 90,” said Redhook brewer Nick Crandall. “This time, we aimed for an American blonde ale and used traditional Northwest hop varieties, pale and crystal malts, and malted wheat for a balanced beer with rich malt character and a bright, clean finish.”

About Redhook
Redhook was born out of the energy and spirit of the early 80’s in the heart of Seattle. While the term didn’t exist at the time, Redhook became one of America’s first “craft” breweries. From a modest start in a former transmission shop in the Seattle neighborhood of Ballard, to the current breweries in Woodinville, WA and Portsmouth, NH, Redhook has become one of America’s most recognized craft breweries.

While Redhook has “grown up” over the past 30 years, one thing has never changed – Redhook is still brewing great beers like ESB, Long Hammer IPA, and Audible Ale. Most importantly, Redhook has fun doing it. Redhook beers are available both on draught and in bottles around the country. For more information, visit www.redhook.com.

About Emerald City Supporters
Founded in 2005, Emerald City Supporters (ECS) are an independent supporters group of Seattle Sounders FC whose aim is to support their beloved Sounders and continue to create the best atmosphere in Major League Soccer. The ECS focuses on uniting supporters based on their love of the Sounders, but also acts as an umbrella organization that incorporates supporter subgroups of all persuasions – just as long as they are supporters of the Sounders. For more information, visit www.weareecs.com.