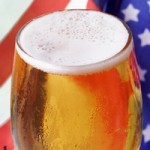 American Embassy, Berlin: Beer. The Fourth of July. And a different kind of German biergarten!

It will be a beer garden the likes of which Germany has never seen. Flavor and diversity will reign. Over 4,500 dignitaries are expected including the German Chancellor and the former President George H.W. Bush. This won’t be any kegger. Guests will be able to experience not only the beer, but see labeled bottles for themselves experiencing the impact that America’s small brewers have had on America’s new beer culture.

Well, it’s Been Ten Years and a Vat of Beers… Is This Clear Enough for You?