(ATLANTA, GA) – Georgia’s original craft brewery is kicking off its 25th anniversary month with a big announcement – it has rebranding from Red Brick Brewing Co back to its original name, Atlanta Brewing Co. 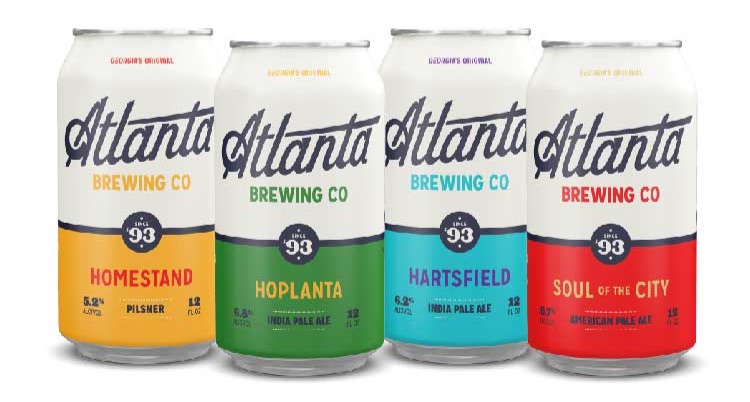 “The craft beer market has changed significantly over the last several years and we felt it was important to highlight the changes and improvements that we’ve made here at the brewery” explains President Garett Lockhart “As a 25-year-old craft brewery, it is important for us to be innovative and stay relevant in an increasingly competitive market. These changes set the table for us to truly reintroduce ourselves to a growing craft consumer base.”

After a law change in September of 2017 that allowed Georgia breweries to sell direct to consumers, the brewery renovated its taproom. This included an expansion to 20 draft taps, allowing the brewers to bring creative new beer styles to the taproom and ultimately to the market. With so many internal and external changes, Red Brick felt like a brand new company, and the decision was made to rebrand.

With the decision made that the 25th anniversary was the perfect time to rebrand, the company got to work vetting branding agencies. After a lengthy search process it landed on CODO, an Indianapolis based agency that that has worked with renowned breweries and food artisans around the world.

3 core brands have made the transition to Atlanta Brewing Co packaging: Homestand Pilsner, Soul of the City Pale Ale, and the flagship IPA, Hopanta. A new contemporary IPA, Hartsfield, win join the mix. This new IPA will feature a new rotating hop in every batch.

“I’m very lucky to have freedom to be creative and design new beers.  It’s a really powerful thing to go to work every day and create a product that can enter the lives of total strangers, and have a small but potentially important impact on those people,” says Director of Brewing Operations Gavin McKenna “we want to bring the best product to these consumers, and as such have renewed our focus on quality control and brewing innovative beer styles. This new branding just makes that a complete package.”

To celebrate the rebrand and 25th anniversary, Atlanta Brewing Co has a full month of events and beer releases. They have over a dozen collaboration releases with local breweries and brewpubs, along with daily events at the brewery and around the state. Fans can get involved in the fun by picking up an Atlanta Brewing Co passport at the taproom, and collecting stamps for each event they attend. These stamps can then be redeemed for prizes. The month is bookended with a rebrand launch party Friday, August 31st at the brewery (featuring the Hartsfield IPA release) and will conclude with the Atlanta Brewing Co 25th Anniversary Party September 29th featuring food trucks, live music all day, and a Double IPA release.

For a full calendar of events and new brand logos and photos, please click HERE

Atlanta Brewing Co was founded in 1993 at a time when there were only 200 or so microbreweries throughout the country. They have weathered 25 years in Atlanta, and are proud to be the oldest brewery in the state. With a focus on quality control and brewing innovative beers, Atlanta Brewing Co looks forward to serving the city they love for another 25 years.